I have been curious about this film from the moment I saw the trailer. It seemed like a quirky romantic movie, and the reviews indicated fantastic-ness. When I saw it (about a month ago) I was incredibly impressed. I can really see why Jennifer Lawrence won best actress at the Academy Awards.

Patrick Solitano’s (Bradley Cooper) life is messed up. After finding his wife in the shower with her lover and beating him nearly to death, he is booked into a psychiatric hospital for bipolar disorder. Pat’s mother manages to get him an early release, and he is taken back to his child home, forced to live with his mother and OCD father.

Patrick is obsessed with getting his marriage back on tracks. He largely ignores the fact that his wife took out a restraining order against him. He continuously looks for ways to regain her love.

One night Patrick’s good friend Ronnie Maxwell invites him to dinner to celebrate his release from hospital. Ronnie’s wife, Veronica (played by the delightful Julia Stiles) invites her sister, Tiffany, to the dinner as well. Tiffany (Jennifer Lawrence) is the black sheep of the family. After her husband died, she coped with her loss by sleeping with everyone in her office. She is every bit as crazy as Patrick, and they strike up an unlikely agreement and eventual friendship. Tiffany agrees to get a letter to Pat’s estranged wife, in return for him helping her train for a dancing contest she needs a partner for. Patrick reluctantly agrees because he is challenged by everything it represents: doing something new, forgiving himself and his attraction to Tiffany. She gives the letter to his wife, but fakes a reply and gives it to him, giving him hope for a possible reconciliation.

Patrick Senior (Robert DeNiro) lost his job and is making money on the side by bookkeeping. He truly believes that Pat junior is the lucky charm for his football team, the Eagles, and wants Patrick to watch every game with him. There comes trouble when Patrick needs to train with Tiffany at the same time there is a game on – and when the Eagles lose, Pat senior loses all his money on a bet. They make a bet with one of elder Patrick’s friend, that the Eagles will win, and Patrick and Tiffany will score an average of 5 in their dancing competition. The Eagles winning is one thing, but the score of five seems a large stretch with the dancing team not even at an average level.

Patrick refuses, and the only way his family convinces him to do it is by telling him that his estranged wife will be there. Tiffany also echoes this lie, although she is very reluctant to do this.

On the night of the competition, his wife does show up – with an invitation of Ronnie and Veronica. Patrick and Veronica dance, and they get their unexpected 5. Tiffany leaves in a rush when she sees Patrick’s wife congratulating him. He follows her, and tells her that he found out weeks ago that she wrote his wife’s “reply” to the letter. He confesses to his realization that he loves her, and not his wife.

The story ends on a sweet note – Patrick and Tiffany happy, surrounded by their families. 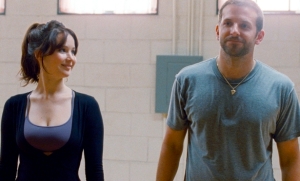 Tiffany and Patrick practising for the dance competition.

The film was great. It is honest and sad, and not the type of film usually released. There is such truth and honesty to the film, and it is more than just a romantic movie with an easy tale. It really is a fresh breeze in the world of movies. I feel that the cast was well chosen, and they did a spectacular job of portraying their roles. The movie is just over two hours long, but it doesn’t feel stretched. It seems like a movie everyone would like, so go give it a try 🙂