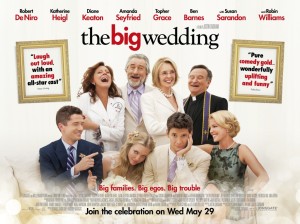 Last Friday night we went out to watch the Big Wedding. We were looking for a romantic comedy to cheer up a friend, and we definitely found one. I was shocked when I saw that the movie got generally bad reviews – I really enjoyed it.

Don (Robert DeNiro) and his wife Ellie (Diane Keaton) split up after 20 years of marriage after Don cheated on her with Ellie’s best friend Bebe (Susan Sarandon). Don and Ellie have three children; Lyla, Jared and Alejandro, who they adopted from Colombia.

Alejandro’s wedding to Missy (Amanda Seyfried) promises to be entertaining when he asks his adoptive parents to make as if they are still married, to accommodate his birth mother’s traditional Catholic beliefs: that divorce is a sin. This understandably upsets Bebe, though she goes with the plan as a wedding gift to Alejandro.

The only daughter in the family, Lyla (Katherine Heigl) arrives in town after her separation with her husband. She is sad because of it, and also because she is incapable of getting pregnant. She is still angry at her father for his cheating ways, and throws up on him at the reception after a concussion.

Jared (Topher Grace) is somewhat a joke in his weird family – he chose to remain a virgin until he finds the one he loves. He is severely tested when Alejandro’s sister arrives, but his mother intervenes by telling her that American women are more restrained and she must treat Jared with respect.

At the wedding, Alejandro and Missy get married on the dock, ignoring the wedding guests and bridal party after every one hears all the scandal’s in Griffin family. Jared and Nuria sleeps together, after she realizes that Ellie had been telling her nonsense to protect her son, although Ellie is far from innocent in her sexual adventures. Lyla’s husband Andrew arrives after Don calls him, and she tells him she is finally pregnant with their baby. Bebe and Don also get married after their ten year relationship. The movie ends where Don puts up the new baby’s name on their family tree.

I really enjoyed the movie. There are many funny moments, and the film managed an acceptable line between romantic comedy and drama. With my own sister’s wedding on the horizon, I hope the wedding doesn’t lose their sanity as much. I was impressed with Katherine Heigl’s performance as Lyla – her characters are usually shallow, and she managed to present this one as damaged and sad, but still capable of teasing and enjoying her family.