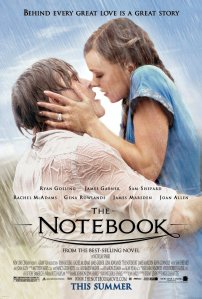 Noah (Ryan Gosling) meets Allie Hamilton (Rachel MacAdams) when she comes to Seabrook Island, where he lives, to visit for the summer. Even though Allie is from an affluent family and Noah has nothing to offer her, they quickly fall in love. Her mother (Joan Allen) is less than pleased but remains uninvolved until Allie stays out late one night with Noah causing her parents considerable distress. Noah overhears Allie’s mom saying that he isn’t worthy of her and tries to leave, and Allie catches him and they fight about it. Allie is convinced they will resolve issues the next day but her mother forces her to leave. Noah is heartbroken and writes to her a letter each day for a year, but finally has to accept nothing will happen because all of them go unanswered.

Years later during the War, Allie meets Lon Hammond (James Marsden). He is everything Allie should be marrying – charming, attractive, successful and from an important Southern family like herself. He is very good to her and eventually they get engaged. Allie is very happy with her fiancé and life but her world is turned upside down when she sees a newspaper article with Noah in and the house he had promised he would restore for her. She decides to return to where she first fell in love and visit Noah. 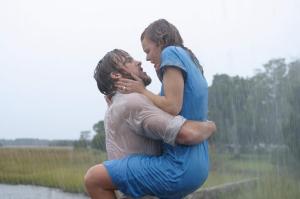 The ever popular It’s-a-Sparks-movie-let’s-kiss-in-the-rain scene.

Their passion and love is immediately reignited. They realize that her mother had kept the letters from her and Allie had never read a word Noah wrote to her. Allie spends a night at Noah’s place and is surprised when her mother rocks up. They reconnect when her mother admits that her love life is similar to Allie’s, and that she chose her rich husband over a poor teenage boy in the same town ages ago. When her mother tells her Lon realized what is going on and is on his way, Allie knows that she should make a decision. Will she go with the man that can give her everything, and is a really good person, or with Noah, who is also a good person but not the man society has chosen for her?

I really enjoyed watching this movie. It is a great book to movie adaption. I think it is the best Nicholas Spark’s version out there. Ryan Gosling and Rachel McAdams have incredible chemistry as Noah and Allie. Both were well cast as the characters. I was really impressed with Ally’s accent – never once did she deviate from the Southern accent. The costume designing was well done – every outfit fits for the years it was developed for.

The movie is really sad for so many reasons – Noah knowing that he isn’t good enough for Allie by society’s standards, the war where he loses his good friend, the fact that Lon (I think James Marsden was excellent as well) is a really good man and will get hurt either way, Noah and Allie’s eventual ending and everything in between.

The movie manages to be a romantic drama without too much sticky sweet moments. That kissing scene in the rain is probably the best kiss in the history of movie kisses, ever. If you ever need to re-fall in love with Ryan Gosling (like that would ever be necessary) watch that scene and the entire movie because he is absolutely gorgeous in the Notebook.