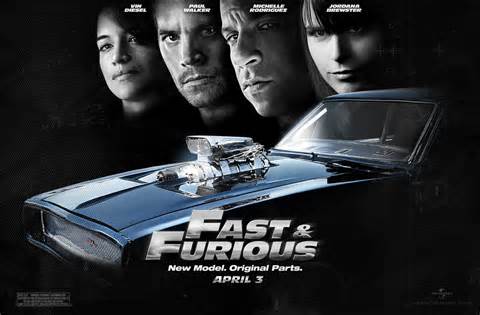 Agent Luke Hobbs (Dwayne Johnson) shows up again and wants Toretto and his team to help him with a specialized task. Owen Shaw (Luke Evans) is a former British Special Forces soldier who destroyed a Russian military convoy and may be looking to destroy a few other things as well. Dominic plans to refuse but Hobbs promises full amnesty to the team for their past crimes and shows Dominic a photo of Letty Ortiz (Michelle Rodriguez), Dominic’s former, presumed dead girlfriend. Knowing that Lettymay be alive forces Dominic to reconsider the deal. Elena says it is okay for him to go and he and Brian sets off to meet with the rest of the crew while the women stay with the baby.

The crew arrives in London and manages to catch one of Shaw’s henchmen. He leads them to Shaw’s hideout, but Shaw has pulled one over them and his team is busy pulling a heist somewhere else. Shaw flees the scene and Dominic and his crew races after him. Letty joins the fray to help Shaw and shoots Dominic.

Hobbs tells the crew that Shaw is planning to steal components to create a Nightshade device that can disable power in the region to the highest bidder. Shaw looks into the other crew and sees that Letty used to date Toretto. She is saved from paying for it because it is obvious she is suffering from some form of amnesia from the blast that killed her.

Taj finds out that Shaw plans to attack a NATO base in Spain. Dominic’s crew interferes and destroys Shaw’s convoy. Shaw, who has Letty with him, drives in a tank and begins to destroy cars and the highway. Letty is horrified, seeing who Shaw really is. Brian and Roman flip the tank and Letty flies through the air but Dominic miraculously catches her mid-air.

Shaw is captured and he tells Brian that he has Mia captured. They are forced to release him and Riley (Gina Carano), Hobbs’ partner, reveals that she is actually working for Shaw. Letty chooses to remain with Dominic and her old crew because she doesn’t remember anything but knows they are the people that truly out care for her.

Shaw and his crew are boarding a plane when Dominic and his show up. Dominic, Letty, Brian and Hobbs manage to board and Brian rescues Mia. They escape to safety as the plane begins to board. Han, Gisele, Roman, Tej, Brian and Mia are keeping the plane from rising by tying their cars to the plane and giving it too much weight to rise. Gisele dies when she rescues Han by sacrificing herself. Letty kills Riley and she and Hobbs leave the plane but Dominic stays behind to find Shaw. Shaw is thrown from the plane and dies, and Dominic miraculously gets out alive in one of the remaining cars. He gives the chip to Hobbs, thus securing their amnesty.

Fast forwarding, the crew is able to return to the United States. Hobbs and Elena go to Dominic’s house, Elena tells him that she wants him to be with Letty and wants them happy and that she belongs in law enforcement. Hobbs confirms that they are now free. Dominic asks Letty if she remembers anything, and although she replies in the negative, she says it feels like home.

In Tokyo, Han is coping with his grief by doing what he loves, driving cars, but his car explodes and he is killed. The other driver walks away from the explosion and leaves a message on Dominic’s phone with the ominous message “You don’t know me. You’re about to”.

The Fast and the Furious franchise is so much fun. It is fast paced and action packed with reasonably good acting and a storyline that is solid enough to keep your attention.

Luke Evans portrayed Shaw very well. He made a brilliant evil mastermind but I think if he had more show time it would probably have pushed my personal rating up.

I have to put it out there that I am not a Michelle Rodriquez fan. She just seems like the type of person I won’t get along with and I think her roles are very typecast and unoriginal. I honestly think Toretto should have stuck with Elena (because maybe then Elsa Pataky can stop pretending that she’s married to my husband, Chris Hemsworth).

Who else thinks the end where Elena tells Toretto that she accepts he should be with Letty is very, very unrealistic? That is the only part I found truly ridiculous. Here honey, go back to your ex I won’t say a word. Asseblief man.

The last big fight scene with the airplane was very long and definitely felt stretched. It was all fun to watch though and I laughed at how Hobbs went with Shaw’s big guy and Toretto went with Shaw – it was like natural selection of let’s fight someone with our own body build (okay, Vin Diesel is much more muscly than Luke Evans but The Rock is fucking terrifyingly big).

Definitely worth the watch!