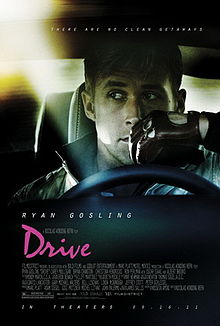 “If I drive for you, you get your money. You tell me where we start, where we’re going, where we’re going afterwards. I give you five minutes when we get there. Anything happens in that five minutes and I’m yours. No matter what. Anything a minute on either side of that and you’re on your own. I don’t sit in while you’re running it down. I don’t carry a gun. I drive.”  The Driver

The Driver (Ryan Gosling) works as a getaway driver. He gives the criminals he drives for only five minutes to get in and out, and will leave them to their own devices should they take longer. His manager Shannon (Bryan Cranston) manages him in his three jobs – the getaway service, as a stunt double and as a mechanic in an auto shop.

Irene (Carey Mulligan) moves into one of the apartments in the building, and the Driver becomes her friend and helps her with small chores and connecting with her son Benicio (Kaden Leos). Even though he is attracted to her, he only acts as a friend because she is married to Standard Gabriel (Oscar Isaac) who is in prison. When Standard comes home, he is suspicious and competitive of the Driver but after the initial awkwardness it is obvious that nothing ever happened and he becomes friendlier.

Shannon wishes to get the Driver into racing, fully aware of how amazing he will be on the track. He persuades mobsters Bernie Rose (Albert Brooks) and Nino (Ron Perlman) to invest in them and buy a stock car chassis so that the Driver can build it up and race it.

Meanwhile Standard is visited by Cook (James Biberi) who he owes protection money to for his time in prison. He is beaten up while Benicio watches and Cook gives Benicio a bullet before he leaves. When the Driver finds them he is furious that Benicio is now in danger, and Irene probably as well, and offers to be the getaway driver to steal $40 000 from a pawn shop that will cover Standard’s debt.

Standard and Cook’s accomplice Blanche (Christina Hendricks) to pull off the heist, the Driver sees a dark Chrysler pulling into the lot. Standard is killed by the pawnshop owner as he leaves the building and Blanche barely makes it into the car and they rush away.

Blanch and the Driver hides in a hotel, where she confesses that she and Cook were double-crossing him and Standard. Two of Cook’s henchmen arrives, kills Blanche before the Driver kills them both. The Driver tracks Cook down and after he smashes his fingers Cook tells him Nino is behind the robbery and double crossing.

The Driver wants nothing of the million anymore, just to get rid of it. Nino dismisses the offer to take the cash plainly, and sends a hit man to the Driver’s apartment building. He enters the lift with the Driver and Irene, and the Driver notices the man is carrying a weapon, kisses Irene for the first time and viciously kills the hit man, terrifying Irene.

What will happen to Benicio, Irene and the Driver? Is there any chance they can ever be together? Will the Driver be ever able to get rid of the cash he doesn’t even want?

Drive was so delightful. The movie was beautifully shot. The spans of silence worked to build the tension excellently and the depth of the Driver’s character was mesmerising when he defended himself. I didn’t find the violence too much at all, and seeing as I don’t have a fondness for guts everywhere I can’t see what people are harping on about. I never felt bored watching Drive and there was never the remote possibility of confusion – everything was so clearly shot that you knew exactly what was going down.

This is one of Ryan Gosling’s most intense roles ever played and certainly one of his best. It takes remarkable acting skills to get the message through without words, aided only by grunts and facial expressions. His character seems calm and a bit of a pushover and then when he is approached by people he did a job for in a social setting that switch is so fast and terrifying and effective.

Carey Mulligan seems to be gaining speed in Hollywood and I think it is well deserved. Sure, she fits into a very specific role but she does it so well that I love her every time I see her on screen. She is definitely becoming a favourite of mine.

The relationship between the Driver and Irene is so beautifully done. Initially the only thing the Driver does is be her friend and assist her. Only after her husband dies they share a kiss, but there is still something remarkably old fashioned about their love story.

The support cast did so well. Bryan Cranston was his ever delightful self, and I have to rave about Ron Perlman for just a few seconds. I find him hilarious. He is so over the top and strange and even when he is a gangster (Sons of Anarchy) there is something infinitely fabulous and mock-worthy about him. He is a great actor and always makes his characters so interesting.

I generally hate open endings. It is so frustrating to never know what happened to the characters! Drive is one of the few movies where it didn’t frustrate me, because the Driver did what he wanted to do – keep Irene and Benicio safe.