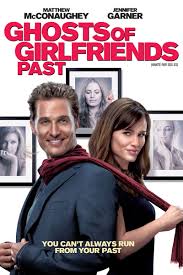 Someone once told me that the power in all relationships lies with whoever cares less, and he was right. But power isn’t happiness, and I think that maybe happiness comes from caring more about people rather than less…

Connor Mead is a successful photographer, and a dog. With a notorious dating resume, he attracts women by the dozen whom he then proceeds to treat horribly and dump in batches when he gets bored. He always tries to push it off to his assistant, Melanie (NoureenDeWulf) but she, as the only female constant in his life, always easily tells him to do it himself. He never knows that she consoles all the broken women afterwards.

Connor is expected home for the wedding of his brother Paul (Breckin Meyer) to the usually delightful Sandra (Lacey Chabert), who is under some stress as the bride to be. Connor is immediately noticed by three of the bridal attendants, but Jenny Perotti (Jennifer Garner) remains unimpressed by his antics because she’s seen it too often to be amused. They have a history going back to their childhood, but now only animosity remains.

Connor tells his brother, very clearly, in front of everyone what he thinks of marriage and his brother’s plans. That night he is visited by the ghost of the first girl he ever slept with, Alison Vandermeesh (Emma Stone), and his legendary fellow dog of an Uncle Wayne (Michael Douglas). His uncle tells him that he is living life the wrong way and that he himself wished he had been a better person. Connor scoffs at it because his way of treating females comes from everything his uncle taught him.

Emma shows him his first love, Jenny, as children where they first fell for each other. Then, he sees Jenny a few years later and that is where his real change came in – he thought she rejected him for the popular jock at school, but she just danced with the said jock because Connor didn’t have the guts to ask him. Heartbroken, the teenage Connor asks his uncle what to do to never feel so sad again and the obviously incapable uncle teaches him how to get a woman, but fails to mention how to love on and treat her right.

As time progresses Connor grows up and steadily turns into the replica of his douche uncle. When he sees Jenny again, they are older and still in school, and he hurts her when he kisses Emma.

Another few years pass and Jenny is a doctor when she meets Connor again where he is an up and coming photographer. They start a courtship, but Connor gets cold feet after they finally sleep together, crushing Jenny.

Back in the present, Connor has managed to stir up a fair bit of trouble by accidentally destroying the wedding cake and letting it slip that his brother slept with one of the bridesmaids just when he and his future wife started dating. Trouble is brewing and Jenny is getting more annoyed by his destructive ways.

Jenny is meanwhile being chatted up by a perfectly handsome, friendly and intelligent doctor the bride thoughtfully invited mostly to be her maid of honour’s wedding sex. Everything is going well but Connor doesn’t like it a bit because he still gets extremely jealous where Jenny is involved.

The wedding party is in uproar when the bride finally learns that her fiancé and friend slept together, even though it was years ago. The wedding is called off and Connor’s brother is finally also now disappointed in him whereas Connor used to be so wonderful in his eyes. Connor finally knows how wrong he has been in his view of relationships and when it comes to Jenny, because he finally sees how the grief took hold of her. Will he be able to get the bride to reinitiate the wedding and Jenny to give him another chance?

I actually had some inclination to watch this and desperately vouched for it in movie night, and it was such a let-down. GoGP manages two fearsome things: it is completely ridiculous and completely unrealistic at the same time.

Matthew McConaughey has a depressing resume of horrible rom coms. It is maddening – he is a good actor with really good roles under his belt, but some of the worst romantic comedies I have ever watched came from him, including:

How to lose a guy in ten days (this one wasn’t that bad, at least it had some foothold in reality),

Ghost of Girlfriend’s Past was very bad. The movie wasn’t anywhere near romcom perfection but it was watchable, there was enough sarcasm wit and quirky comment to keep me mildly interested and then Emma Stone rocked up, on a bed, and transported herself and Connor through Connor’s dubious dating past. The problem wasn’t Stone herself – she was as amusing as always, but I have never witnessed a worst attempt at any time travel related activities.

I really like Jennifer Garner plenty and thought she did the best with the material that was given to her. She really has the look that Jenny needed – clever, confident, calm and classy. I enjoyed Jenny’s wit and her hold over Connor.

I did enjoy one thing: to me this movie showed how perception influences every single decision in your life and how even when your information is wrong it can completely have an adverse effect on your emotional maturity.

GoGP is once again a movie with a star studded cast that had absolutely no chance of succeeding because of an unimaginative and ridiculously boring script. I mean, not even Michael Douglas was enough to save this.