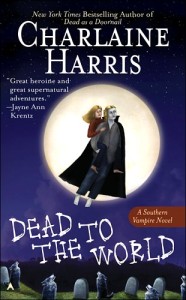 With Bill travelling Peru to continue building the vampire database the vampire queen of Louisiana wants, Sookie Stackhouse is rebuilding her life in Bon Temps without him. She has a lot to focus on – her brother is dating a shape shifter, she is still working on her self-control to not read people’s minds, and she is also dealing with the snide remarks about her previous relationship with the vampire.

Sookie finds Eric Northman on the side of the road one night, stumbling, clad only in jeans. There is obviously something very wrong with him – he can’t remember anything about his life or even his position as the Sheriff of Vampire area 5. Pam and Cho show up, and they ask Sookie to look after Eric while they try and catch the witch that cast the spell on Eric. Jason, Sookie’s brother, negotiates a massive fee for Sookie’s help, and the vampires reluctantly agree because they know the witches have put a large price on Eric’s head should he be delivered to them.

The offending witch is Hallow, a powerful, underhanded and corrupt woman who drinks vampire blood and that, combined with her powers, makes her a formidable enemy. Pam tells Sookie that the witch wanted profits from Eric’s vampire bar, Fangtasia, as well as Eric for a lover, and when he refused, she cast the spell on him.

Sookie has another problem to deal with when Shirley Hennessey, Jason’s boss, calls to ask where Jason is because he isn’t at work. Worried, Sookie checks up on him, but although his truck is at home, he is missing. The police don’t seem too overly worried about this, as Jason is known to do whatever he wants.

Sookie takes it upon herself to find her brother. The options of his whereabouts are endless. When the police find tiger tracks near his house, they think he was mauled to death. Sookie also knows that Pam and Cho could very well have taken Jason hostage as insurance while she takes care of Eric, and Sookie is also worried that Hallow and her coven might have taken him.

With Eric having no idea who he is, devoid of his charming but offensive personality, he and Sookie soon become lovers. Pam and Cho propose a plan to take out Hallow and restore Eric, but will they be successful? What will the vampire do when he is his old self again and knows that he has become Sookie’s bed mate? Can Sookie find Jason alive and well?

The Fourth book in the Sookie Stackhouse series comes in at nearly the same pace as the previous three. I have to say that I wasn’t as completely enchanted and having fun as with the other books. Sookie really gets around a whole lot and she doesn’t discriminate when it comes to sleeping partners, and that is starting to grate on me. I think she blatantly ignored it most of the time that her brother was missing, because hey, she was banging the hot Viking vampire.

There were a lot of things happening in this book that could have been explored to great detail – Hallow, Jason’s disappearance, an inbred wolf community, Eric losing his memory, the fairy rocking up. Everything was swept under the rug most of the time and not really written to what it could have been.

Hallow turned out to be so disappointing. She was the complete reason that Eric lost his memory, but her character was underdeveloped and she was destroyed as a by-product. I also think the fairy was incredibly lame. Why include her if you are not going to completely incorporate her completely?

Oh yes, and regarding Eric’s memory: It would have been way more fun if Eric had pretended to lose his memory – it jibes perfectly with his character and is something he would do. THAT could have been a plot twist.

Debbie Pelt’s demise was something I found petty pleasure in. No matter my irritations with the heroine, I am still on Sookie Stackhouse’s side and want her to live happy and safe. Debbie was very evil and deceptive about it, and I really like Alcide, who deserves better.

Bill is still his annoying self, and he has tons to make up for in the future books. Talk about moody, difficult and obsessed – and people say Eric is the difficult vampire in here?!

I am definitely continuing with these books, but I do hope that there is a developing story line somewhere. So far the books are completely separated from each other and there is no continuing story line, which is something that can make the books much more enjoyable.

23 thoughts on “Book Review: Dead to the World (Charlaine Harris)”