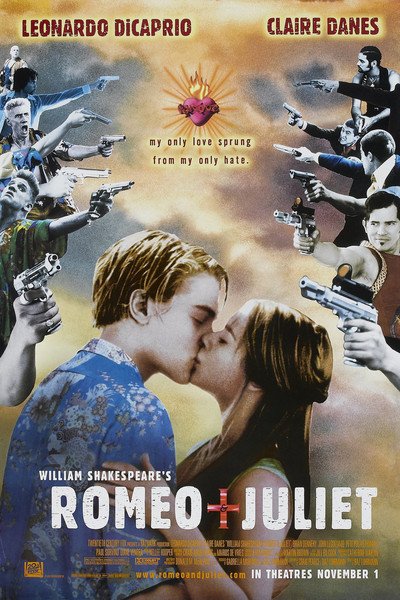 The 1996 adaption of the timeless story of two hormonal teenagers made it onto my Blindspot list for three reasons – I love Baz Luhrmann’s work and this is one of the few movies I haven’t seen of him, I adore DiCaprio and young DiCaprio was my dream boy as a kid and I mean Claire Danes was a lady I loved a whole lot before Carrie Matheson (because DIE BITCH DIE).

Baz Luhrmann has a very characteristic directing style.R&J had the same feel of all his movies – straight out flamboyance everywhere compared to the poignant and sweet love scenes. It is such a strong contrast and achieves to highlight that no matter how crazy life can get, romance is still the sweetest thing there is and will remain unchanged through history. The modernization of the classic can overwhelm the senses initially but is well done – there are such ghetto scenes, the Montague’s and Capulets’ are depicted more as mobsters than anything else with both families being overrun with hoodlums.

I think apart from DiCaprio and Danes my favorite performance was that of Paul Rudd. Man, he is such a cutie. He managed to be Paris perfectly – a lovely, vacant pretty boy that was only placed in the story to act as the final catalyst to Juliet’s rash decisions.

DiCaprio… sighhhhhhh. He is so perfect. Young Leonardo is so beautiful. Old Leonardo has evolved into something like royalty in Hollywood, and is really hot in all his distinguished glory. However, this young Leo is so sweet and his acting is raw and powerful. I doubt that this movie would have been as effective without him as Romeo. He is the perfect personfor this role.

Claire Danes was also a great choice for Juliet Capulet. She is sweet and innocent and fresh, and an anomaly compared to her gaudy family. She and Leo had wonderful chemistry throughout the movie and there are a few scenes where I held my breath because it was so lovely and sweet.

I can’t tell you how many times I thought “TEENAGERS” throughout this movie, because really – the rampant hormones in this film caused all the drama. I mean – falling in love, getting married and dying seems a little extreme in the span of only three days.  I don’t think anyone on this planet doesn’t know how this story ends – but I kept thinking how horrible I would have reacted if I didn’t know the end and I saw that unfolding – there would definitely have been things travelling through the TV screen!

My Blindspot list has really intense and wonderful movies on, so while I enjoyed this movie a lot and would recommend it to fans of Shakespeare, DiCaprio, Danes and Luhrmann, it won’t ever end up as my number one at the end of the year (because I already know which one is going to be number one!)