SO I’m finally ready to review GoT Season 6. It is time, and I must say I’ve avoided it for a while because five was a bit of a waste in my opinion. I’ll do one episode per week, so if you’ve seen it, please feel free to discuss below – but if you haven’t and the internet hasn’t spoiled literally every surprise for you, note that that all of these posts contain spoilers.

First and foremost is the hopelessness that surrounds Jon Snow’s death. Seeing him lying there so lifelessly is quite depressing, and it truly seems at this stage like yet another Stark has perished. I’m loving Ser Davos still, he’s probably one of my favorite guys at this point. He obviously has no point what Melisandre has done to Shireen Baratheon. I hope when he finds out Melisandre will volunteer to face Ramsay’s dogs before facing his wrath. Speaking of Melisandre – how hilarious and creepy is that scene where she drops all pretenses and we see just how well she’s handled aging? I felt some vindictive pleasure in that.

I didn’t really get Ramsay mourning for Myranda and then feeding her to the dogs, but hey, it’s Ramsay here. Iwan Rheon is working his heart out in this role and he really deserves all the praise. I don’t know how I can constantly wish that he would be a decent human being, even knowing what he’s done. It’s probably that innocent face that hides such a deplorable character. 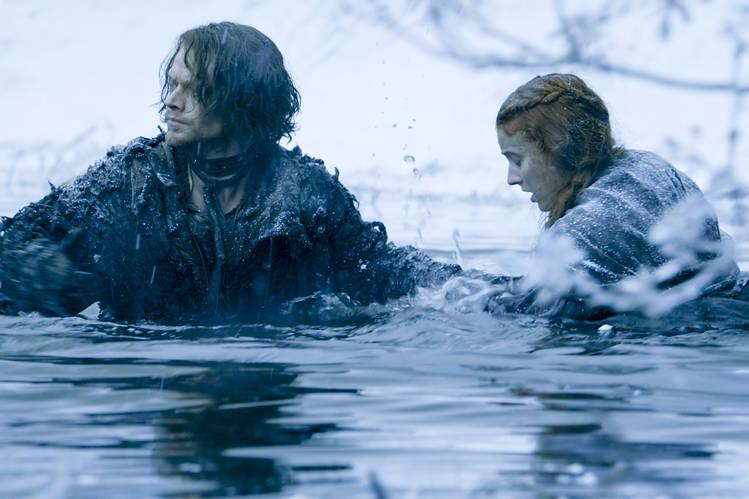 Sophie Turner and Alfie Allen are both also doing outstanding work in this season. It really looks like they are freezing to death (I’m sure they did looking at that hopefully non-CGI weather), and they are both just so hopeless. I was exceptionally happy when Brienne and Podrick turned up, and things finally started looking better for Sansa. And yay to Theon for his bravery – atonement for his past transgressions, though I am not sure that I will ever completely like him after that Robb business.

Cersei’s grief is still showcasing the only humane thing about her when she learns of Myrcella’s death. I liked that, as I always do, and I think that is why people aren’t quite ready yet to hate Cersei like they hated Joffrey. What I really didn’t like was the Sand Snakes – Ellaria and the Sand Snakes seem petty, bitchy and just plain unnecessary at this point. I would have liked if they could have been slightly more like Brienne – still kicking ass but not being such pains about it. I’m not sure what is planned for The Sand Snakes in the upcoming episodes, but it seems a waste of time to be in Sunspear right now.

Everyone’s other favorite Tyrion Lannister keeps his wit and personality in Mereen. He’s still teamed up with Varys, who always manages to have little birds. No one is particularly happy with Daenerys at this point, who has been captured by the Dothraki in what really is the homebrand version of Khal Drogo. I must say, Daenerys is okay, but I’m really much more interested in Castle Black and Ramsay Bolton at this point.

To finish off the character focus, Arya is blind and begging on the streets of Braavos. I really hope the Waif dies, and soon, because I hate her. Not overly interested in this storyline right now, but Maisie Williams is also doing a fine job.

For a season starter episode it went quite well. The characters are all over the place at this point, and there are a whole lot of story lines involved. I’m not necessarily wishing that the body count rise, but it would be more helpful if some of these characters can get to one location and reconcile a few things. I’m particularly uninterested in Ellaria and her Snakes, it was just Season three / four business and while it was cool then, it’s just a waste of screen time now.