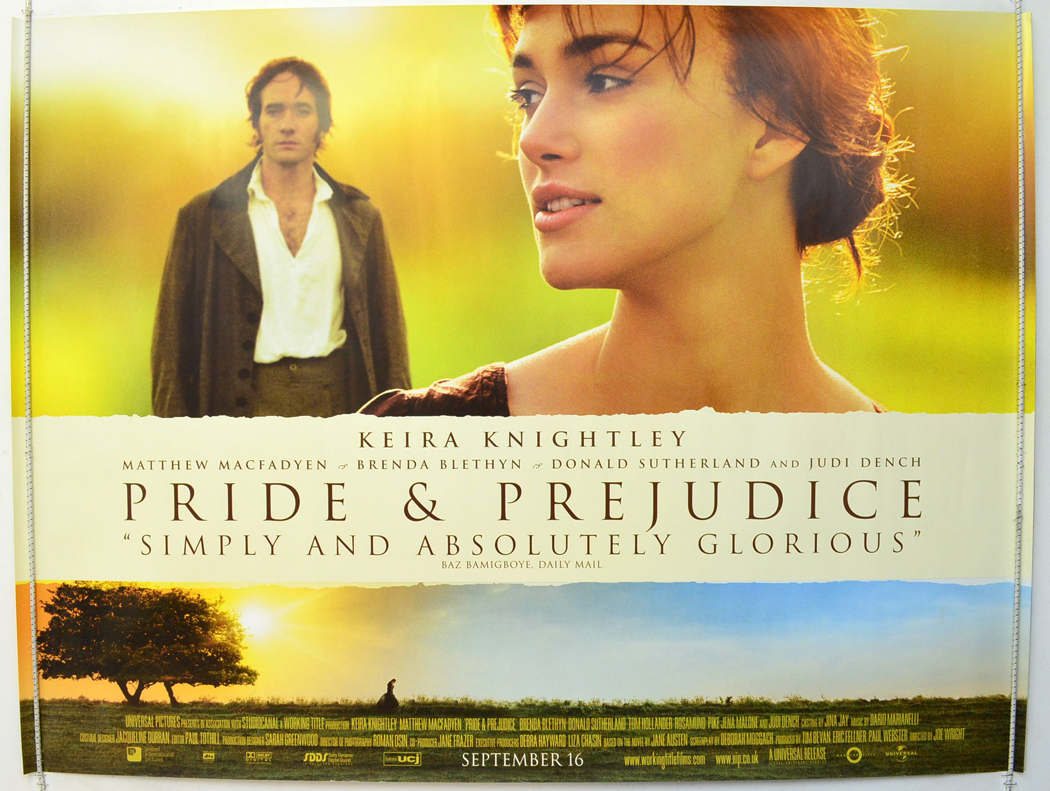 Plot: Sparks fly when spirited Elizabeth Bennet meets single, rich, and proud Mr. Darcy. But Mr. Darcy reluctantly finds himself falling in love with a woman beneath his class. Can each overcome their own pride and prejudice?

Continuing on my slightly unhealthy craze of Pride and Prejudice and all things Elizabeth and Mr. Bennet related, I had to watch this 2005 adaption again. I can’t find a review for it anywhere on my blog, and I know I’ve seen it before – is it possible that I did it pre-blog? I’ll never know!

I had a great time. I remember enjoying it the first time but not really appreciating the ending back then – I think I didn’t get at that stage just how British this story is and how perfect that ending was.

There are a number of changes made, but it was organic– I didn’t feel that it deducted from the story at all. The changes made were done to fit the span of the book into a movie, so a lot of information and pivotal scenes were ignored. As I said it didn’t damage the film much, but the book certainly provides a more comprehensive scope of Darcy’s character and the change Elizabeth was able to inspire in him.

Matthew MacFadyen is truly a perfect Darcy. He is a wonderful actor, truly being able to convey emotions without saying too much. He is perfectly British and his contained atmosphere and telling outbursts as Mr. Darcy is spot on.

My love/hate relationship with Keira Knightley seems set to continue. The way she has of pulling her mouth frustrates me to no end. But, as I listed here, the fact that she has an annoying mouth does not derive from the fact that she is an accomplished actress. Ms. Bennet is as challenging to a female lead as Mr. Darcy is to a male lead – complex, intelligent characters with the weight of being a beloved classic weighing them down. She manages her role admirably and is a delight as Ms. Bennet, and has sufficient and delightful levels of impertinence that made me love her all the more.

Rosamund Pike as Jane Bennet was a choice that I was not that all that pleased with, but she did her best. There was a desperation to her impression of Jane that I did not enjoy – Jane is shy and sweet natured and a bit too believing in the best of others, but she isn’t a desperate woman. Jenna Malone as Lydia Bennet was a perfect choice – Lydia is really the worst thing, she is a flirting little girl with no sense or morals or particular care for her family. It takes a strong actress to bring that particular disregard to family and tradition to life, and the callousness with which Lydia does it as well. Donald Sutherland as Mr. Bennet properly emanates that exhaustion Mr.Bennetmust feel from a lifetime with the skittish and irritating Mrs. Bennet (Brenda Blethyn) – who can’t but help being such an annoying person. I wish I could have seen more of Rupert Friend as Mr. Wickham – he was good on screen but not particularly often on it, which is frustrating as Mr. Wickham is quite important to the events that unfold. I wish I liked Simon Woods as Charles Bingley – he was just too ginger for my idea as Bingley. I did like Kelly Reilly as Caroline Bingley – she was as snobbish and backhanded and mean spirited as her character requires.

I felt similarly in the book – a need to rush through and to get to the end to know everything, but the pacing was slow and careful and makes you subsequently pay a lot more attention. The British countryside is beautiful despite the depressing weather, and the director managed to capture it and incorporate it into this very British movie.

The ending of the film is different to the book only in execution, with the phrases altered slightly but still much the same. It is powerful and touching, and the chemistry between Knightley and MacFayden is through the roof at that very moment. I’ve seen the extended version and the normal version, and the extended is a lot more true to what happens in the book.

I enjoyed this adaption so much. It is a great cast, it is well paced and despite missing some key events it still tells what it needs to tell. Watching this soon again is inevitable. An 8.5/10 for me.