Plot: An adaptation of the fairy tale about a monstrous-looking prince and a young woman who fall in love.

Of all the sentimental attachments I have to Disney classics, my attachment to Beauty and The Beast is the strongest. As a young girl Belle was like this guiding light – she liked to read, she was interested in a greater life and she was the author of her own story. She finds love because she’s brave and can see past the exterior, not because she needed rescuing. Belle rocks man. So it was with an uneasy mix of excitement and trepidation that I handled the news of a live animation adaption. Would they ruin it? Would they, GASP, try and be original? I am pretty happy with the original work and I would not have appreciated a new take where Gaston is the hero and the Beast is just a Beast – I’m looking at you, Maleficent. 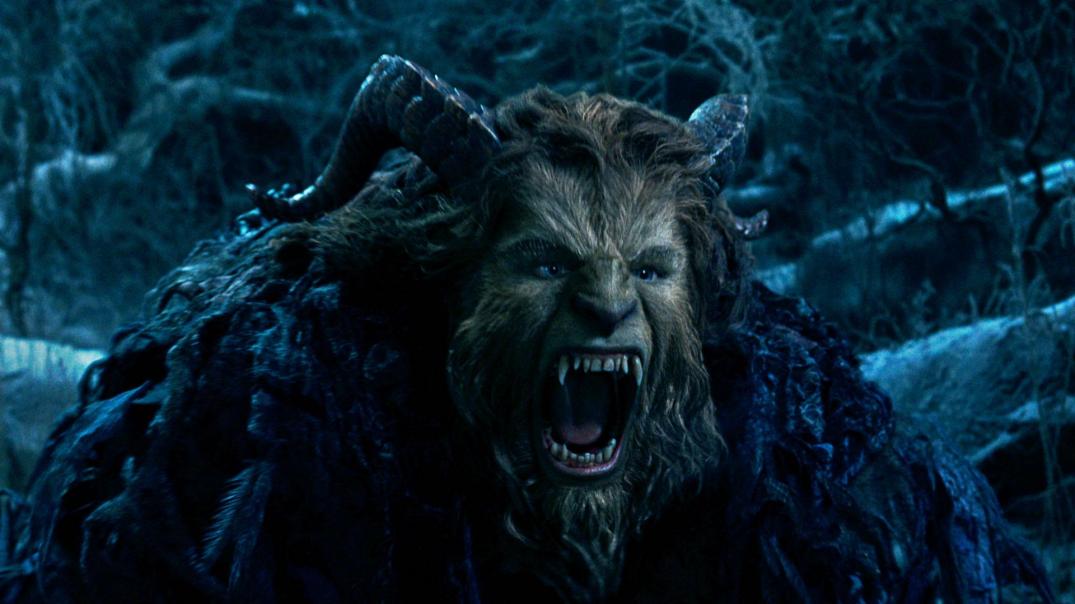 However, I loved it. Emma Watson is most certainly not the world’s most accomplished actress, but she’s been unfairly criticized for her work as Belle. I was expecting much worse, both in terms of acting and of singing. People are reporting her as weak and unconvincing. She wasn’t. She is at times slightly wooden but not offensively so. Is her voice auto tuned? Maybe, but since I’m no Adele I am not going around judging people for their singing. Whether her haters like it or not, she’s a face of gender rights at the moment and that, combined with her serious personality and Harry Potter legacy made her a spot on choice for Belle. That yellow dress sure is pretty and springing and she seems to have good chemistry with Dan Stevens – who wouldn’t? – And eventually looks more comfortable with the role. 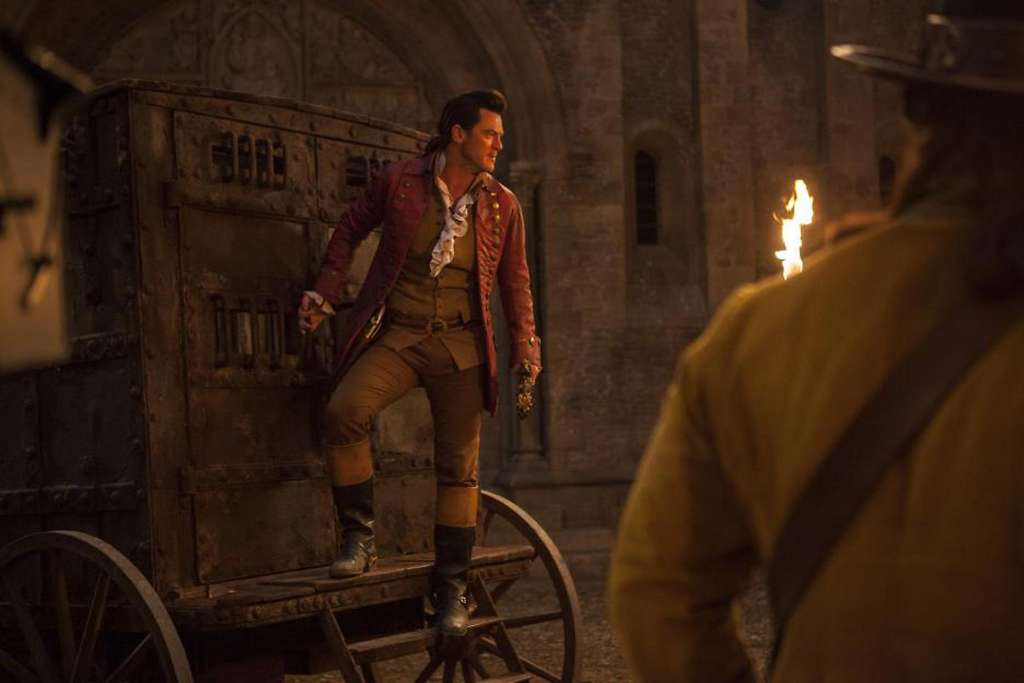 A standout performance is that of Luke Evans as Gaston. He’s the boorish, muscled and mean spirited villain with such style that it is obvious he had the time of his life being Gaston. He also has hands down the best singing voice of the cast. My favorite musical of this film is Gaston, he was perfect in every way and the musical is brilliantly executed.

Josh Gad as Lafou provided the required quota of comic relief. He was just a bit over the top. I also didn’t really understand the issue with him being Gay. Goodness me, I guess I’m just that peculiar that I really couldn’t care about someone’s sexual orientation as long as they are decent human beings, and my experience with the gay community has me convinced they are, in actual fact, more often better people than their straighter counterparts. On further thought Lafou wasn’t particularly straight in the original work, so I just don’t get the fuss. I found the third musketeer’s reaction to his wardrobe change hilarious and spot on.

My only issue with Dan Stevens as the Beast is that I didn’t get to see more of his lovely face. It is a pity. He has a gorgeous voice. Considering most of his work was under CGI (mores the pity), I can’t truly comment on his acting in here.

Maurice (Kevin Kline) was much less of a cartoonish fool and a man dealing with grief and guilt. I quite liked this impression of him, and made the character much more lovable. Also great voice work from Emma Thompson, Ian McKellan and Ewan McGregor.

It is true that Bill Condon provides an extravagant affair. He clearly had Disney’s massive financial backing because his sets are elaborate and finely carved. The only one lacking was Mrs. Potts. She definitely got the bums rush from the development crew. Everything else is so ornate and rich to look at. I enjoyed the castle crumbling as physical evidence of the Beast’s chances of finding his human form beginning to wane all the more.

I know the original work well enough that I can parrot the songs, so I picked up on the changed words. I don’t get why they did it though. It wasn’t necessary for the original works are close to perfect. My only serious complaint is the rendition of Beauty and the Beast. Neither the song in the movie or its’ rendition by Ariana Grande and John Legend comes close to the original Celine Dion cover. The new songs were dangerous experimentations. I liked all of them, but someone sure had balls to create new scores for such a beloved classic.

A lot of political commentary going on and naturally I was on board – women reading, doing their own thing, and specifically Belle stating that she’s not ready to have children yet to the complete bewilderment of her community is a priceless moment. We feel you, Belle.

I actually really loved this adaption. Disney has a knack of producing great live animations. It is somewhat lazy work with about half the creativity than an original production would require – just do good casting and great graphics and depend on the fans that are hit with a wave of nostalgia. It remains quite wonderful work however and I can’t wait to buy the DVD! 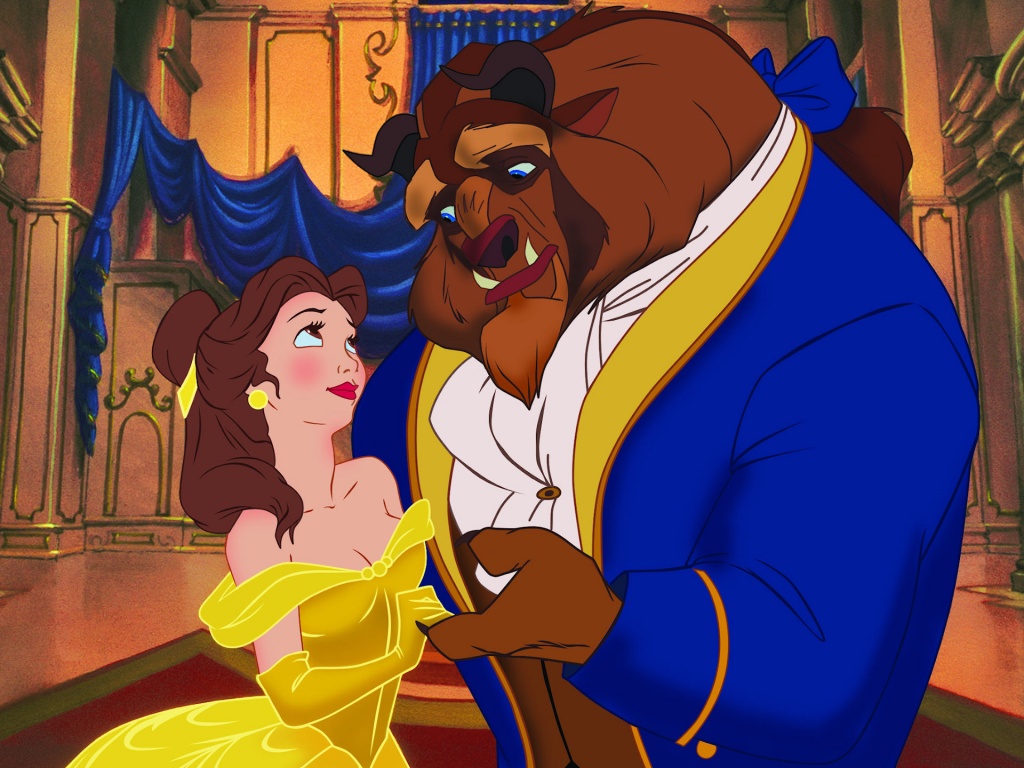 Narrator: Once upon a time, in a faraway land, a young prince lived in a shining castle. Although he had everything his heart desired, the prince was spoiled, selfish, and unkind. But then, one winter’s night, an old beggar woman came to the castle and offered him a single rose in return for shelter from the bitter cold. Repulsed by her haggard appearance, the prince sneered at the gift and turned the old woman away. But she warned him not to be deceived by appearances, for beauty is found within. And when he dismissed her again, the old woman’s ugliness melted away to reveal a beautiful enchantress. The prince tried to apologize, but it was too late, for she had seen that there was no love in his heart. And as punishment, she transformed him into a hideous beast and placed a powerful spell on the castle and all who lived there. Ashamed of his monstrous form, the beast concealed himself inside his castle, with a magic mirror as his only window to the outside world. The rose she had offered was truly an enchanted rose, which would bloom until his 21st year. If he could learn to love another, and earn her love in return by the time the last petal fell, then the spell would be broken. If not, he would be doomed to remain a beast for all time. As the years passed, he fell into despair and lost all hope. For who could ever learn to love a beast?

Bell lives in a small French town and she considered strange because she is a girl who likes to read and isn’t overly excited by the affections of the town’s hunk, the self-important Gaston. Her father is affectionately known as the town lunatic but he is actually just an experimental scientist. Bell sends him off to the science fair but he gets lost on the way and goes into the Beast’s castle. The Beast finds him and locks him up. Bell’s horse returns to her house and she knows something is wrong. Bell goes to the castle and exchanges her freedom for her father’s. The servants in the castle, who was also turned into inanimate objects by the curse convinces the Beast to give Bell better treatment because she may be the one to break their curse and restore them to all their humanly glory. Their relationship starts rocky but after Bell runs away and the Beast saves her from wolves they start getting to know each other. Everything goes great until Bell sees her ill father searching for her in the woods. Beast shows that he learnt to be self-sacrificing and sends her after her father. She takes her father home and Gaston and the asylum’s manager arrives wanting to take her father to the asylum. They lock bell and her father up to go hunt the beast, but Chip, Mrs Pot’s son, saves them by freeing them with Bell’s father’s scientific invention. They rush to the castle and find Gaston ready to kill the Beast but the Beast sees Bell and starts fighting back. He nearly kills Gaston but takes pity and releases him, only to have Gaston stab him in the side. He lies dying and Bell tells him that she loves him and it is luckily in time and he turns into the handsome prince he was before the curse. The entire castle returns to their normal states and Bell and the Prince get married. 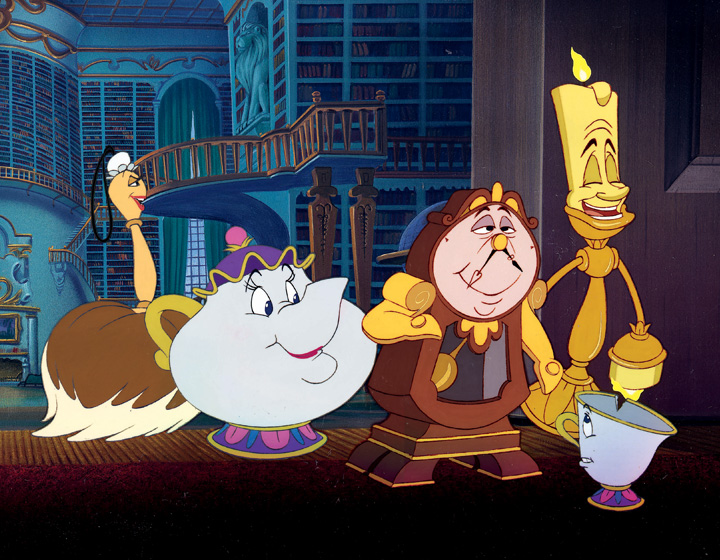 I love the classic Disney movies. They are all so beautifully made and the music score fits perfectly with every story. I love the old time romance in all of them and the illusion that a perfect prince exists. Beauty and the Beast is my favourite of them all because Bell has a lot more to offer than the other heroines – she is strong and intelligent and doesn’t swoon to Gaston or the Beast – she is making her own destiny and saves the Prince at the end through her bravery and love.

Beauty and the Beastis better written than most movies today. It has a solid start – telling us who the beast is, introduces the heroine and villain and make sure you know who is who.

It is also a movie I watch at least three times a year and can say without shame that I always sing along.