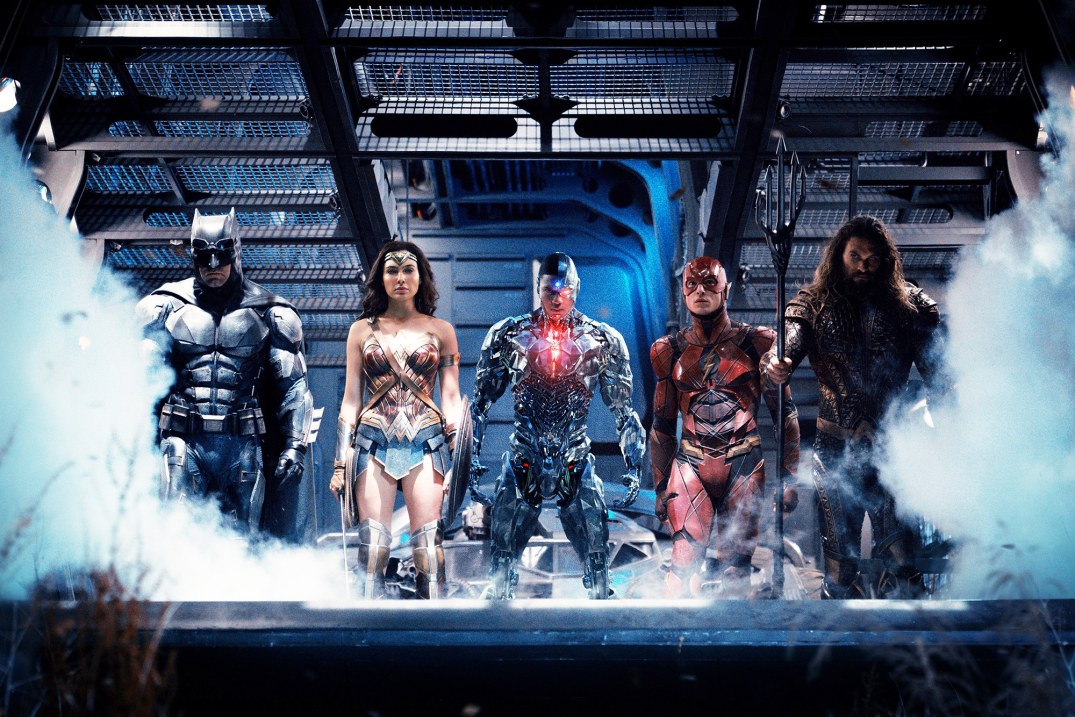 Plot: Fueled by his restored faith in humanity and inspired by Superman’s selfless act, Bruce Wayne enlists the help of his newfound ally, Diana Prince, to face an even greater enemy.

You can say a lot about the lackluster of appeal the majority of movies DC has eked out has, but I do admire how devoutly DC sticks to Zack Snyder. Whether it is detrimental or genius or blindly devout, they are sticking with this guy and we must all just deal with it. Patty Jenkins did a fantastic job with Wonder Woman, and she’d be a strong contender for any DC material out there, but I guess these guys are just not ready to let a woman do the job she’s certainly qualified for and choose a lesser able man to do it.

BUT, despite what the internet is telling you (Seriously people, you don’t have to hate everything just because it’s fun to smack down films), Justice League qualifies as one of the better DC movies. Certainly second to Wonder Woman, but compared to the joke that was Suicide Squad (which I didn’t hate completely) and the absolute disaster that was Batman vs. Superman (I’d like to forget that one completely), the Justice League is nearly Oscar material in comparison.

Snyder, who I’d like to say at this stage it can’t all be his fault, has a distinct modus operandi. The excessively dreary dialogue and repressive atmosphere that makes you question why you ever liked movies, the irritatingly long fight scenes (remember Zod vs. Superman? FML), the monumental and recurring and completely unnecessary GCI. It’s exhausting, but up until this point DC has not suffered at cinema. They have likely noticed how much more popular their competitor was, and it was a really good decision to attempt some lightheartedness while also keeping the signature dark style.

However, only one of these irritations became a reality. The fight sequences were handled ridiculously quick compared to Batman vs. Superman as well as the drawn out Superman film in 2013. There were attempts at humor, which worked for the most part. The story was less cluttered and the dialogue had a clear direction. The CGI was the main culprit and was horribly abused. Since Henry Cavill is on the poster, it can be safely deduced that he’s in the film, so that is not a major plot spoiler I’m giving you now (or if it is you lack deductive skills). Followers of Cavill on Instagram will know that he’s sporting a moustache for an upcoming Mission Impossible film. (He, and maybe Tom Selleck, remains the only men to successfully WERK the moustache) He was contractually obliged to keep said moustache throughout shooting, and when Justice League reshoots clashed with the ‘stache, the powers that be decided to CGI the shit out of Cavill’s face. The results are startling, leading many people to wonder if he is, in fact, Human Shrek. The scene where his face is altered is clearly visible and terrible work – I can’t imagine how that got approval. His resurrection is fake and devoid of feeling because of CGI-Superman. I was confused in cinema – his face was distorted and it looked terrible. I sat in the second row of the cinema (was fully packed), so got a very close up and disturbing view of CGI-Superman. Even knowing now why he looked like that does not make it better in any way.  He had a whole lot more teeth than what is usually visible on his beautiful and talented face. That said, Cavill is a superb Superman – he has the gravity required for the success of the role and certainly looks the part. It also takes a whole lot to convince me that Jason Momoa is the second prettiest thing on screen. 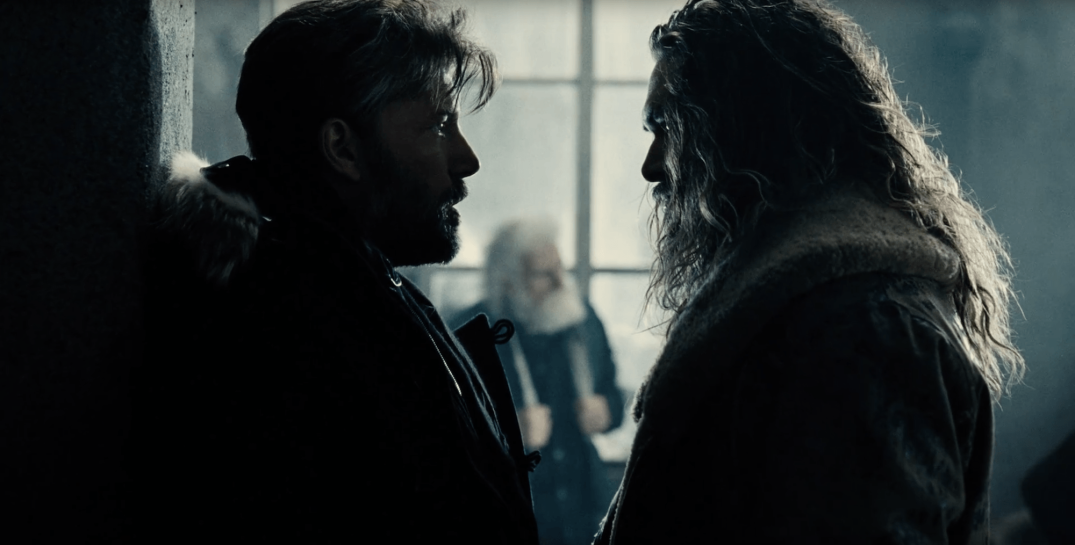 Justice League is miles, and I mean MILES, better than Batman vs. Superman. Ben Affleck has become more comfortable as Batman, he has some believability in the role now, and manages to inject some humor and sarcasm into his portrayal that was desperately needed. He has injected a humanity into his portrayal that was absent in BvsS, something that made him that much more a success of a character. There are also multiple mentions to the fact that the reason he’s a superhero is because he’s rich, which got some chuckles from the crowd. Ezra Miller is a great Barry Allen – he’s so hilariously young and awkward and he is responsible for making the movie more lighthearted. I’ve been pained by Miller in the past – his usual roles are so weird and whiney, but he was an excellent choice for this role. I could have done with some more backstory on Allen, as well as with Cyborg (also an excellent casting choice in Ray Fisher), and the delicious Arthur Curry (Momoa). They showed enough of him to make me excited to watch Momoa as Aquaman for that origin story. It struck me that it was the first time I heard Momoa actually speak English (his other native tongue being Dothraki), and for his major return to the spotlight this seems to be a great role for him.

Wonder Woman returns to Gotham, and her work is questioned by Batman, who displays into the White Man syndrome fantastically. He queries why she hasn’t been a beacon to people, never considering that she gets to make that choice herself. All her actions are basically only to show how strong her male colleagues are, and when Aquaman (Jason Momoa) sits on the Lasso of Truth, her beauty is complimented whereas Superman, Cyborg and The Flash have their abilities complemented, a sure sign that a male director called the shots. I love Gadot as Wonder Woman, and it is an unquestionably the better film. I’ve seen some unhappiness by the Amazonian’s decidedly smaller costumes, and it’s true – Themyscira underwent a troubling fashion change at the hands of Snyder.

I cannot stress enough how good the casting is in this film. Ezra Miller impressed me to no end, and he has a quirky banter with his team mates. He even manages to be endearing. Momoa is well, Momoa, big and manly and tough. The glimpse into the underwater world we will get to visit in Aquaman was beautiful, and I can’t wait.

A not so good thing about Justice League is the utterly forgettable Steppenwolf (Ciaran Hinds). He’s poorly introduced, and for all the hard work in keeping the “boxes” safe, he just smashes through all lines of defense. He is also yet another CGI villain from DC. His vampirish followers are slightly scary. His end is ridiculous and leaves room for so much open ended questions. Where did he even go? That end is also preposterous – as my friend pointed out we have all these super-humans battling Steppenwolf and the second Superman pitches everything is saved? What is the point of the Justice League then? How about the incredible Cyborg? The warrior Wonder Woman? The Flash that is seemingly only as fast as Superman, eliminating the need for him almost entirely? Aquaman that saves the team from certain death by water?

I’d love seeing a more realistic villain – this guy was so vague about his purpose and half the time he was a secondary focus point. Can we maybe have less CGI villainy and more real-human villainy? I hope with Lex Luthor in the credit shots we are going to have that the next round.

I enjoyed JL – it is not without flaws but it is the first real attempt DC made to correct their ensemble films. It’s been a good year for these guys and I’d love to see what they conjure up next year.

Have you seen Justice League? Leave your thoughts below