Plot: As a war between rival queen sisters Ravenna and Freya escalates, Eric and fellow warrior Sara, members of the Huntsmen army raised to protect Freya, try to conceal their forbidden love as they combat Ravenna’s wicked intentions

I’m probably being very lenient with the rating, because this movie has quite a bit of flaws. For all its’ flaws it is an entertaining watch. I didn’t expect a second movie after Snow White and the Huntsman, but how could I not? Hollywood will milk a success till it lies twitching feebly on the ground, milked of everything that made it so good to start with.

The Huntsman is back, sans Snow White. She’s busy being haunted by the Mirror and is not Kristen Stewart anymore (I think Stewart was not interested in showing her face again lest we remember her shenanigans with the previous director).

The Huntsman, or Eric, is living a holistic life after defeating Ravenna, and is not impressed with the charm or charisma when the handsome Prince pitches and requests that he hunt down the Mirror and prevent evil to rise again. He takes along his two dwarf friends, who are really against female dwarves for some reason.

And for no further plot reasons than to bring romance into the story, two female dwarves join the hunting party. Soon another lady arrives – Eric’s long dead ex, Sarah, played by Jessica Chastain. Naturally questions arise and we, and Eric and Sara, see what happened that fateful day when he thought he saw her murdered.

There is also another Queen in the mix – Queen Freya (Emily Blunt), who lost all her niceness when her child was burned in her crib by her lover (I really don’t blame her for losing her niceness). As she’s Ravenna’s sister, there is plotsies afoot, and she sets out with her newly acquired power to take a lot of land by icy force and force children to love her – I mean who wouldn’t when the choice is between love and being murdered? Love comes easily then. 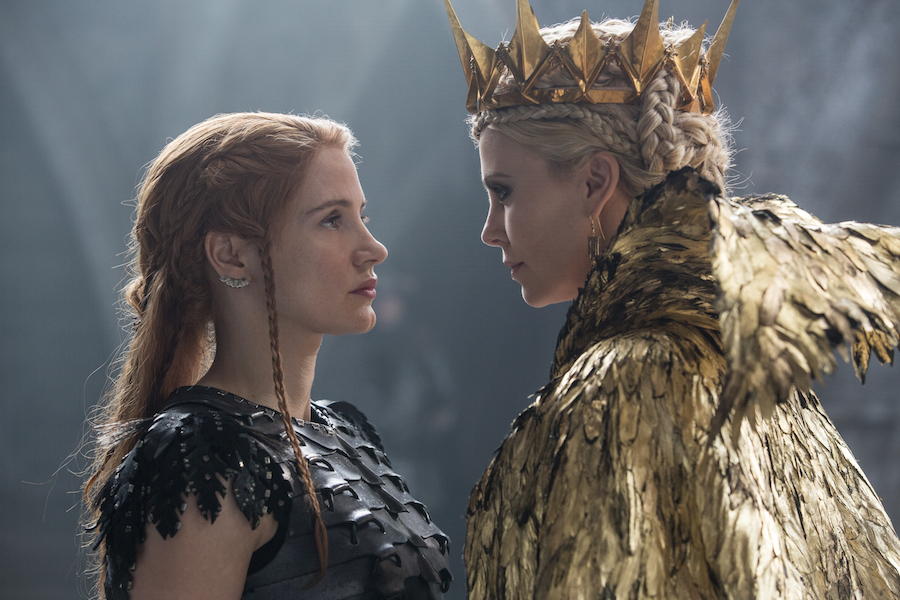 Winter’s War takes a lot of stories and tries to combine them. Some is really unnecessary and a lot of the time Winter’s War looks like a really pretty perfume ad, but it really isn’t bad. The cast is stellar and Emily Blunt is particularly enjoyable (though please don’t think for a second I didn’t enjoy my husband CH as well!). There is a lot of sadness, something Blunt does really well, and Charlize Theron is disgusting, frightening, beautiful and evil as her return as Ravenna. The mirror also stays amazing – how they brought that concept to the screen looks ridiculously cool.

I love love love Chris Hemsworth. I thought I would always choose him as Thor, but this roughly hewn and really charming Eric works so well. And, accents. GAWSH. I think this role suits Hemsworth well because it firstly gives him something to be other than Thor Odinson and secondly it is written in a way, and especially in the second movie, to highlight his natural charm and that gorgeous smile. I am obviously a massive fan and will gladly pitch whenever he is onscreen, but it isn’t only for the looks – he is a decent actor and although I am a bit sad to say this and it is because he hasn’t really had time to prove himself in very serious movies, he is an excellent popcorn entertainment actor.

If you want to enjoy Winter’s War, it really is possible, because it isn’t bad. I think we should all just sometimes remind ourselves that it is okay to enjoy a movie because it is fun and sweet and looks pretty – not all things need to be dark and intelligent and serious!

Some more, ehm, shots of the movie: 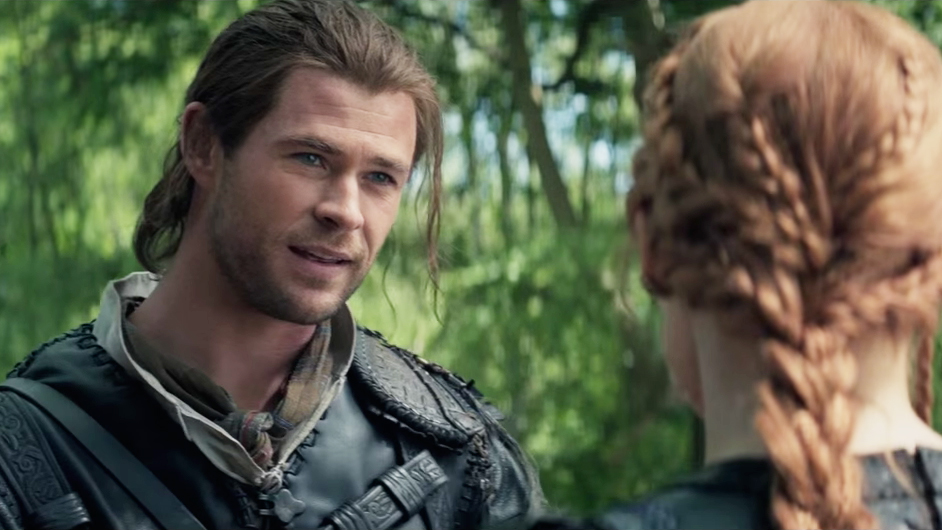 The Desolation of Smaug starts at the Prancing Pony, in Bree, where Gandalf (Ian McKellan) finds Thorin Oakenshield (Richard Armitage) and tells him about the Arkenstone, the secret passage into the mountain, and that it is Thorin’s duty to reunite the Dwarves. Gandalf suggest that a stealthy burglar might be the best way to steal the Arkenstone back from the dragon Smaug.

Fast-forwarding a year later, Thorin and his company are still being hunted by Azog and his misfits. The Hobbit Bilbo Baggins (Martin Freeman), now the company’s contracted burglar, tells them that they are also being followed by a giant black bear. Gandalf rushes them to the house of skin-changer Beorn (Mikael Persbrand), who changes into the black bear when he wills. Beorn isn’t an overly friendly fellow and he isn’t fond of dwarves, but his hatred for Orcs eventually makes him lend horses to the company. The company heads towards Mirkwood, a forest over which a strange and unknown curse lies. Gandalf leaves them there, insisting that he has urgent matters to take care of.

Azog is meanwhile summoned to Dol Guldur, an ancient evil stronghold, and is promoted to lead the armies against Middle-Earth. Azog instructs his son Bolg to start hunting Thorin whilst he is busy with his new job. Gandalf arrives at Dol Guldur, and is taken captive by Azog and the Necromancer reveals himself, who is actually the Dark Lord Sauron.

In the forest of Mirkwood the Dwarves and Hobbit quickly stumbles off the path and gets lost. They are caught by giant spiders, but Bilbo saves them once again. The Elves arrives and takes the Dwarves captive to their King Thranduil (Lee Pace), and after Thorin gives him lip they are imprisoned. A strange relationship starts between dwarf Kili (Aidan Turner) and the Elf Tauriel (Evangeline Lily) Bilbo, who sneaked in unseen thanks to his Ring, once again saves the dwarves by getting them out of prison and escaping by hiding in barrels that are washing downstream. The elves are alerted of their escape, but they are all attacked by Orcs and Kili is shot in the leg by a black arrow, poisoned by Mordor. When Tauriel hears that Kili is set to die a horrible death because of it, she sets out after the party to save him, and is followed by her friend Legolas (Orlando Bloom)

While washing downstream, the party meets Bard the Bowman (Luke Evans). He smuggles them into the Lake-town where the descendants of Dale lives. Thorin promises the Master of the Lake-town a share of the gold under the Mountain, and the party is treated like heroes. Thorin decides to leave the desperately sick Kili behind, although it is also his greatest dream to see the ancient Dwarf realm. Fili, Oin and Bofur choose to stay with him and try to help him. The town is soon filled with Orcs, but Tauriel and Legolas hunts them and they flee. Tauriel saves Kili by healing him with the weed Athelas.

Thorin and his remaining party reach the Lonely Mountain, where Bilbo discovers the secret passage. He heads in to steal the Arkenstone, and awakens Smaug (voiced by Benedict Cumberbatch). When they hear the dragon’s awakening, Bard attempts to bring the black arrow, the only weapon that can kill a dragon, to the town’s launcher, but he is arrested. He leaves the arrow with his son to hide. Back in the mountain, Bilbo and the dwarves trick the dragon into reigniting the forges, and they attempt to kill him by drowning him in molten gold. Smaug re-emerges, furious, and heads to the Lake-town to hunt the people that helped the Dwarves. Bilbo watches in horror as Smaug leaves the Mountain to the village, knowing that he helped unleash the horrors that await the Town.

The scenery. I have always thought the entire franchise did a fantastic job capturing the beauty of Middle-Earth.

Ian McKellen as Gandalf. He is probably the greatest casting choice in the movies. I think he does a superb job as catching the kind hearted but powerful wizard who was so responsible for saving Middle Earth.

The Dragon is really cool.

Thorin: He is played well by Richard Armitage (except for my favorite Hobbit peeve that the dwarves are too attractive), and his descent into greed and madness is shown here in a few scenes where the movie goer starts to see that the quest is changing him.

Azog: While not a central character in the book per se; he is terrifying in the movie.

Mirkwood, and the clarity of how different the Elves there are to their kin in Rivendell.

The splendor and riches of Erebor.

The appendices were written in. Most of the extra shizz in the movie is authentic Tolkien – from the back of the extended Lord of the Rings books set I have at home. The necessity of including Gandalf’s imprisonment in Dol Guldur is questionable, as is the plenty of screen time given to Radagast and Galadriel. The Hobbit is essentially about Bilbo Baggins and his adventure with the dwarves. A book as thin as the Hobbit needed at the most two movies – now with three it is stretched out.

Legolas: First, he is too butch to be an elf. What happened to the light and fast guy from LOTR? He seems like he will break the tree’s branches. Secondly, he has this huge story in this movie (and I can be wrong) but he isn’t even in the book.

Love story: I love a good love story, but Tolkien’s world is exciting enough to be portrayed without additional relationships between elves and dwarves.

Although not worth going to the movies for, there are some great scenes and fantastic fights. The Desolation of Smaug is not on the level of The Lord of the Rings, but if you ignore the dire deviations from the novel, it is watchable.