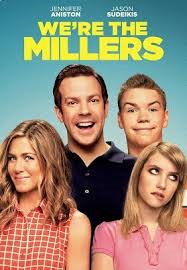 David Clark (Jason Sudeikis) is a small time drug dealer. He lives in an apartment building with the socially awkward Kenny (Will Poulter) and Rose (Jennifer Aniston), a stripper. When he helps runaway Casey (Emma Roberts) when they try to rob her, he himself is robbed and loses his entire stash of weed and backup cash. His drug supplier says if David collects some weed in Mexico, all will be forgiven, and David creates a daring plan, needing the help of Kenny, Rose and Casey to act like his family, and they present themselves as the suburbanite family The Millers.

Will David and his delinquents be able to pull it off? Especially with the surprise presence of a DEA officer and his family?

The Millers was really not a bad movie if you look at it with the knowledge that it is cheap humour and isn’t trying to be something more. The desperate attempts to be very funny and offensive worked in some places.

I personally love Jason Sudeikis – he is cute in such an everyday kind of way and has can be rather funny. Jennifer Aniston usually is either super annoying or tolerable, and in here she is tolerable. She is still astoundingly beautiful and she has some ability as an actress. Emma Roberts isn’t on the level of her aunt in regards to acting but she was fine in here – sulky teenager roles suit her to the ground. I loved seeing Ron Swanson again – he always brings such fun to any project he is involved in.

The story line is naturally ridiculous and makes such a joke of the American police system. It makes inappropriate jokes about nationality, sexuality and crime, the cheap tricks of easy humour. I did actually laugh in a few places, so they didn’t make a mess of things, and while there are some cheesy moments and even more predictable ones, I had a good time.

It is a bit long for comedy – two hours, but fun to watch at the end of the day.

I enjoyed this movie, probably not something I will watch again, but not bad overall.

Recommended if you need an easy laugh.