Plot: A Christmas Eve snowstorm transforms one small town into a romantic haven, the kind you see only in movies. Well, kinda. After all, a cold and wet hike from a stranded train through the middle of nowhere would not normally end with a delicious kiss from a charming stranger. And no one would think that a trip to the Waffle House through four feet of snow would lead to love with an old friend. Or that the way back to true love begins with a painfully early morning shift at Starbucks. Thanks to three of today’s bestselling teen authors—John Green, Maureen Johnson, and Lauren Myracle—the magic of the holidays shines on these hilarious and charming interconnected tales of love, romance, and breathtaking kisses.

The Jubilee Express is the only book in this compilation of short stories I would have invested in if it was a full length novel. I quite enjoyed it, though it isn’t without its’ share of ridiculousness. The craziest thing that went down is the reason of her parents’ imprisonment. I also laughed out loud that she would stay with complete strangers in an unknown town – was this a Christmas story or a horror one? Could have gone either way. It seemed that Jubilee only got hold of her character halfway through the book – that is when her observations became very funny. I always like when books address what teenagers should really be aware of – things that even when a boy is completely perfect, he might not be perfect for you. Jubilee realized that when her perfect boyfriend ended up being too perfect for her, and she acted quickly and decisively. The book ended a bit bluntly, but with a limitation of a hundred or so pages it wasn’t that surprising to me.

I didn’t enjoy this book as much as the first book when it started out. I think it might have been because I would have been okay with the story carrying on a bit more, that was a nice read. I also think John Green writes deliberately strange at times.  I enjoy most of his work, so it would seem safe to say his method works as often as it doesn’t. The big thing I didn’t enjoy about this is that it has three main characters. With a hundred pages you can’t have three personalities to fit in. Also – this series is obsessed with cheerleaders. Everyone and their icy popsicle has something to say about the group of cheerleaders that end up stuck in the Waffle House during a snow storm. Is this insecurity a large thing amongst teens in the States? I’m so glad we don’t have cheerleaders here. Anyway, the short recovered about halfway through and got moving. I liked everything The Duke was (although I hated that she was constantly referred to as “The Duke”). She was a girl who was laughing, eating and speaking her own mind and she won her guy in the end. It managed to address a bit what girls with confidence to just be themselves still face – I mean how dare we not giggle and fawn over men, and expect them to be onboard with our wants, needs and personalities? I can definitely say that this short rose in my estimation the more I read, but I probably wouldn’t have enjoyed a full length novel.

Patron Saint of the Pigs

The final short in this combined universe was a lot of fun, although I had such issues with the main character. Addie was just an awful, spoiled, pretty white girl who got upset when her truly amazing boyfriend had a personality that wouldn’t make him fawn over her. I really didn’t like her that much, and it increased as the book progressed. I did like her relationship with her friends though – they had great interactions with each other and it seemed like natural bantering. I would have liked to have Jeb in the story a bit more – he’s a ghost figure throughout and I felt I missed him without even knowing him.

Patron Saint of the Pig had moments in that was so funny. The pink hair was a constant topic, the bantering between friends, Jubilee’s name just continuing to create confusion where she went and the complete chaos of the last few pages.

I couldn’t help but notice that throughout all three shorts Starbucks and The Waffle House was mentioned. ALL THE TIME. We need to see how much these guys paid for their endorsement, because it must have been significant.

I liked the end of the book, I just wasn’t sure if Addie deserved to get happiness again. I get that she made the decision to change, but I can’t help but wonder how many times she would have abused Jeb’s feelings in the future.

I read this story completely non-seasonal (it plays off during Christmas and we are sadly still ages from that) – but it was a really nice read. Light hearted and fun, it is really well written. The stories are all linked somehow but not in a way where you feel that it is forced or unbelievable. It’s a definite feel good book, and reads easily, so if you in the mood for a good book where no one dies and everyone ends up happy, take a read!

Plot: After an all night adventure, Quentin’s life-long crush, Margo, disappears, leaving behind clues that Quentin and his friends follow on the journey of a lifetime.

The main question on everyone’s mind right now should be whether John Green is systematically becoming the new Nicholas Sparks in Hollywood. Like Sparks, Green is a fairly decent author with a penchant for sentimentality. It went down great with both The Notebook and The Fault in Our Stars respectively, but progressing further on the impact of their literary attempts decline on-screen.

I didn’t hate Paper Towns. I actually think teenagers will likely love it. It’s not bad, it is just made for teenagers who simultaneously want people to understand them and remain mythical creatures full of secrets. I’m past that, in life and what I want in a movie by now. 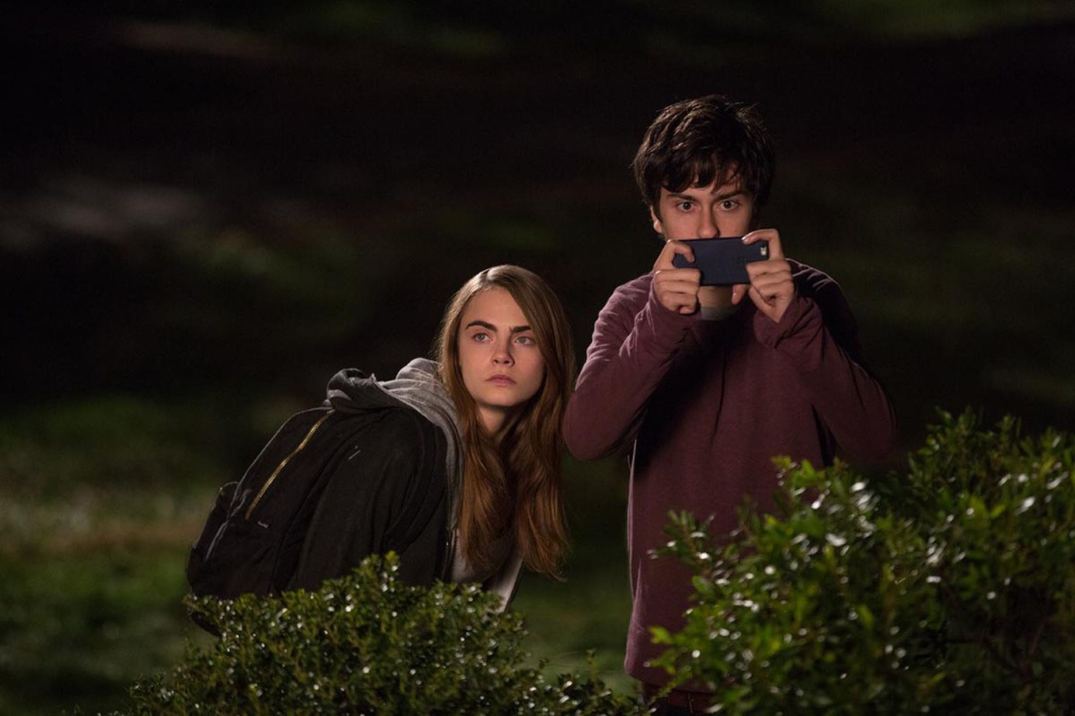 I really enjoyed Cara Delevingne. Her eyebrows are perfection, so naturally I’m going to love her for that, but she also surprised me with quite decent acting abilities. I’m confessing now that when I saw she’s branching into acting I wasn’t all that impressed, but I’m convinced that she can do something with it if she chooses to. As for the character, Margot Roth Spielman was a terrible person. There is nothing more that can be said about her, really.

As for Nat Wolff and the rest of the cast, I am just way too old to relate to them. Really, such kidlets. They weren’t bad, but all those deliberate attempts to be quirky and interesting were boring.

The story didn’t suck; it was just unbelievable and silly. As I understand this is the least liked book of Green, so I’m sure there might be better things in store in the future. Let’s hope so.

I am totally getting my book reading vibe back. I’ve been reading some Nora Roberts and John Green, as well as finishing the Davinci Code. Here’s a list of the next few books I’m planning to read. Let me know if you’ve read them and what your opinions have been about it 🙂

Since this book is busy getting organised into a movie, I really want to read the book beforehand to be able to properly compare. I really enjoy John Green’s writing as well – he is such a brilliant author!

2. The Woman Who Stole my Life: Marian Keyes

I’m always really excited when one of my favorite authors brings out a new book. YAY!

I just really want to finish the series and see what happens to Sydney and Adrian! 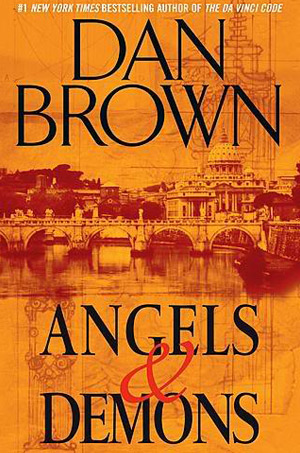 I really didn’t like The DaVinci code. However, I’ve heard that Angels in Demons is actually much better, so I am willing to give it a try. 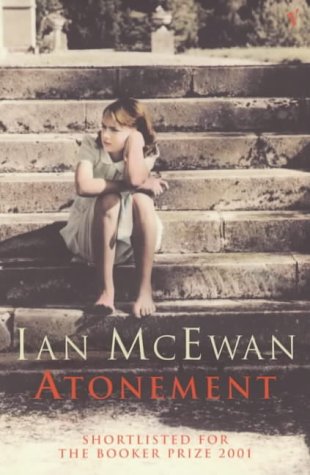 The movie is just the saddest watching experience ever, and I just really want to see how everything unfolds in the book, even if I know the end.

What books are you planning to read?

Today’s book scene was sent to me by Zoe, who blogs over at the Sporadic Chronicles of a Beginner Blogger. She has an amazing blog full of reviews on books, movies, and series. Go head over to her page and follow her if you haven’t already 🙂

The Fault in Our Stars is such an amazing book to read. You can read my review here and Zoe’s here. I can’t wiat to see the movie

If you want to take part in this – please send me your favorite book quote at natashastander@gmail.com

Zoë recommended that I try out The Fault in Our Stars. After her successful recommendation of the Great Gatsby, I knew I had to try it out.

I am so happy I did. It is an amazing book. It is powerful and funny and sad and excellently written. I cried and laughed so much I probably looked a bit bipolar.

Hazel Grace Lancaster meets Augustus Waters at a cancer support group. Hazel has Stage Four Thyroid cancer and Augustus is in remission after amputating his right leg to osteosarcoma.

Hazel is immediately drawn to Augustus. He is funny and knows where she is coming from. She tries to distance herself from him because she is scared what her death will do to him if he comes to love her. Her parents try to make her understand that she is not a grenade, and that they are all incredibly lucky to be able to love her.

Grace shares her favorite book with Gus; An Imperial Affliction by Peter van Houten, an American author who moved to the Netherlands. Her greatest wish is meet him and hear what happens to all the other characters after the protagonist dies. Gus finds a way to make this happen. He uses his wish “The Genies” give to dying cancer children (Grace used hers to go to Disneyland with her parents) to fly him, her mother and Grace to the Netherlands. He admits on the plane that he loves her.

On their first night in the Netherlands they go to a fancy restaurant courtesy of Van Houten and his assistant Lidewij. The next day they meet Van Houten, who is a raging, rude alcoholic. He is extremely rude to them and seems to have a particular grudge against them. Lidewij resigns as a result and together they go to the Anne Frank house. Grace kisses Augustus in Frank’s house and to the applause of the rest of the visitors. Later that night they sleep together.

Grace finally understand the “loving a grenade issue” when Augustus tells her that his cancer has returned to various parts of his body. He promises to fight the cancer. Will Augustus survive? How much time does Grace have left? What is Van Houten’s problem?

I don’t have the ability to say how much I liked this book. Nothing I write will do justice to the Fault in Our Stars. It is truly powerful. The story is so sweet and unfair. Two teenagers facing cancer is probably the saddest thing to read about it but I didn’t even care. 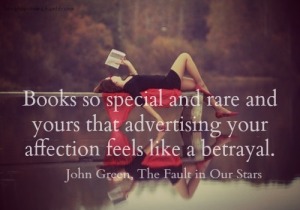 The book is being made into a movie this year, and I seriously suggest you read the book then watch the movie too.