The humor: It is plentiful, intelligent, sharp, everywhere and of a higher quality that entertainment produces as a usual standard. It is dry wit properly used. I can’t get enough of it.

The costume design is gorgeous and suitable to the periodical setting

The estate – just wow. It is absolutely gorgeous and such a strong structure. I don’t often freak out about many buildings – architecture is not my greatest passion but I can really get behind a beautiful structure if it appeals to me. It was even more fascinating that this is a real holding and not just a magnificent prop stage.

The depiction of relationships between upper, middle and lower class is keeping me really intrigued. All the sides are really well developed and gets proper show time. The Class system remains one of the most amusing hierarchical systems in the world. It is not really prevalent in South-Africa so I cannot imagine how people would willingly subject to such forms of oppression. It is interesting though, and the clear line between the classes even while they are still perfectly civil to each other.

Maggie Smith slays. Just WOW. This role is so worthy of her time. The dry sarcasm, the disdain, her supreme lack of care of what people think of her, that entire character she brings so authentically to life. She’s my idol. That’s all. 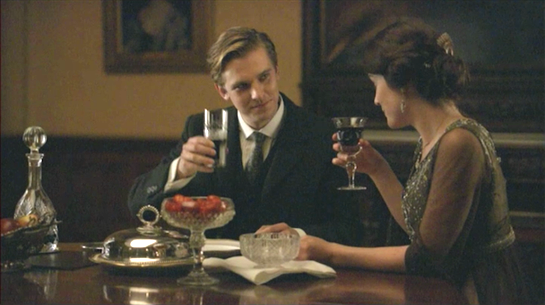 There are some characters I love and some I dislike, but every cast member does a wonderful job. The characters I dislike are purely because they were written for that exact reason – as antagonists. The characters I love the most: Matthew Crawley (Dan Stevens), who I can easily devote this entire post too, Mary Crawley (Michelle Dockery), whose sad and intriguing lifestyle I can think days about,  John Bates (Brendan Coyle) – THAT FIRST SAD EPISODE WTF, The Lord Crawley, who has such a loyal heart and works so hard to save his inheritance.

Theo James, I am so sorry. HAHAHA. My demented sense of humor was way too tickled about what happened to the Middle-Eastern prince when he visited Downton. It is just…. HAHAHA. The ramifications of how that poor girl must have felt. (Not disclosing who though #notospoilers). You are absolutely gorgeous though, sir.

That kiss. OMFG I nearly went through the roof. It is so beautiful and proper and appropriate and introduced on the perfect time in the story.

Dan Stevens and his eyes. I get really irritated when people harp on other people’s pretty eyes. It seems so… false. But Dan Stevens has eyes that make me finally understand that sentiment of carrying on about it. It’s so blue and gorgeous and when he focuses on something… just hold me back haha. ❤ ❤ I also love the character that he plays. Matthew Crawley has the biggest heart and the most common sense, and I just adore his determination to stay true to who he is.

I really mostly liked all of it. The pilot episode is the weakest but it is still very good and the show picks up pace and character as it progresses through the season. It remains such an extremely cultured experience to watch, that I kid you not, I wore stockings the next day to work as a testimony of my adoration and desire to be part of 1912’s England. I really do dislike two of the characters, not for their acting, because it is wonderfully good and exceeds in making their characters exactly as unlikable as they were created to be. The relationship between Edith and Mary has so many complex layers and is quite satisfying to watch. I really sympathize with both of them – Mary has such a daunting task that goes against every grain of her personality and poor Edith is always found lacking next to her two absurdly pretty and charming sisters. They both did something that made me shake my head in exasperation – sisters should never fight like that. I see both of their sides and the vindictiveness of their actions – it’s horrid but there is an element of reason to what they do.

This is truly a wonderful show and enormous amounts of fun. It might be somewhat chaste to people who like things constantly bawdy (hey, not judging, I enjoy bawdy fun too), but it is such a lovely experience watching this DownTON Abbey and I can’t wait to get through the rest.:)