Parker Brown took an event that would have taken most people under and turned it into something beautiful. After the tragic death of both her parents she and her best friends took their respective expertise and started Vows, a wedding venue in Greenwich, Connecticut. Parker is the wedding coordinator, with Mac leading the photography, Emma the flowers and Laurel the desserts. Parker is excited to be planning her three friends’ respective weddings: Mac to Carter, Emma to Jack, and Laurel to Parker’s Brother Delaney. She ignores her own loneliness and chooses to focus on the things she excels at: planning, clothes, shoes and planning.

Malcolm Kavanagh, a friend of Delaney, has the ability to fluster Parker – something that is rarely done. He is cocky by nature and never gets repelled by her “Brown frost”. After he helps her repair her car tires after a small accident, their relationship goes into an interesting direction. He takes her home on his Harley, and Delaney tells Malcolm that he won’t be able to ever get Parker back on the bike. Malcolm takes the bet, tells Parker that he did, wins her trust, and sees her playful side when she orders him to give her Del’s share of the bet.

Parker and Mal gets to know each other better, and Mal heads off trouble when he immediately prevents male drama by telling Del he is interested – cleverly preventing not getting punched like Jack did for hooking up with Emma before he told her honorary brother. Parker gets along wonderfully with Mal’s mother, which charmingly disconcerts him.

As their relationship grows, Parker realizes that there are deep and dark areas in Mal’s life which he doesn’t want to share. Most of it relates to his abusive childhood and an accident that happened when he worked in Hollywood as a stunt double. For Parker, who trusts those she loves unconditionally, it is quite a learning curve to accommodate Malcolm’s trust issues. They have a fight when he witnesses a car accident and is unable to relay what happened, and gets irritated with her for not understanding. As an apology, he buys her fabulous shoes, becoming a fan with all the girls. She accepts it, and him, back into her life. But will they continue to butt heads or find a way to love each other?

Even though I don’t find Parker and Malcolm the most realistic of couples, I do think that the book was well done. It was enjoyable, it wasn’t stretched out, and it finished off the Quartet series nicely. Parker is my favorite character after Laurel – she is intelligent, organized and a fitness freak. She accepts her brother’s protective attitude, acknowledging that it is something that he needs to do. Her compassion and kindness endeared her to me from book one, as well as her sneaky ways to find out information when she wants to.

Read my reviews on the other three books in the series below:

Laurel MacBane’s life as a dessert chef is wonderful. Not only does she work with her closest three childhood friends, Mac, Emma and Parker, she gets to live on the beautiful Brown estate where she works as well. Their wedding business Vows goes from strength to strength and she is happy. The only thing she still secretly wants is the love of Delaney Brown, Parker’s brother.

Del and Laurel’s relationship as friends get questioned one night when he annoys her, and she kisses him to prove she isn’t a sister he is supposed to take care of. He steals her shoes to get her to confront him again, but she is adamant that she isn’t going to. When Parker learns of the new development in her brother and best friend’s relationship, she is excited for them, but it takes some time before Laurel confides in her as she would about any other man.

Laurel and Del make a pact to first be certain that their relationship is going somewhere before they take it to the bedroom. As they start dating she realize that Del may indeed be the man for her, forever.

The only thing Laurel is insecure about is Del’s standing in the community. Though by no means a loser or cast-out, she still feels marked by her parents’ scandals. Compared to her, Del and his Brown legacy is almost royalty in Greenwich. They tackle their problems as they arise, and there is only one incident that she hides from him – her confrontation with Mac’s horrendous mother Linda. Laurel catches Linda trying to sneak into Mac’s home, and when the confrontation doesn’t go as Linda planned, she attacks Laurel and tells her that Laurel’s father slept with her, and that she will never be good enough for a Brown. Laurel tries to shake it off, but ultimately she believes what Linda said – that she isn’t good enough. When Laurel and the entire group head towards Del and Parker’s new beach house, the cracks start to show in their relationship. Can Del truly understand where Laurel is coming from, and will he be able to meet her halfway?

Of all the books in the Bridal Quartet series, this is my favorite one. Laurel MacBane is the character I can relate to the most. She is cranky, dedicated, obsessed with her work and just a little bitchy. She and Del seemed like a couple that could actually happen – two people who love each other already, and have a firm base of friendship to work from. I liked Del – successful, sexy and good to the bone, he manages to appear more real than Jack did. I liked how no one needed to push him into admitting his feelings, or taking the final leap.

Read my reviews of Vision in White and Bed of Roses (one and two) respectively.

Have you read any of these books? Tell me what you thought! 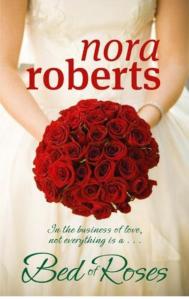 Book two of the Bridal Quartet series from Nora Roberts starts shortly after the end of Vision in White, where Mac and Carter got engaged. Bed of Roses focuses on the love story of Emmaline Grant, the florist of the Vows wedding organisation.

The insanely beautiful Emma has always hoped to find love as great as her parents’. Her work in the wedding industry truly suits her to the ground, as she is very romantic and sweet.

After a party one night, her car breaks down and she is assisted by Jack Cooke, a close friend of the Quartet and best friend to Parker’s brother, Delaney. He helps her fix her car temporarily, and they have a moment under the car’s hood. She refuses to accept the attraction at first, because she is under the impression that Mac and Jack had a relationship early on in their friendship. The first of her three friends to notice the slight dynamic shift in Emma and Jack’s relationship is Laurel, but Emma swears her to secrecy. Emma and Jack kiss during a function, and she tells all her friends, including Mac who tells her she and Jack never had a relationship. Emma relaxes, and she and jack start to explore their new feelings. Del and Jack bump heads when Del learns of it, but they make amends when Del realises Jack actually has real feelings for Emma.

Jack and Emma’s relationship goes from strength to strength, but Jack’s typical relationship phobias and worries irk her. The little reactions he has to her personal belongings in his space hurts her, and even though she tries to ignore it she knows it is a real problem for them – how can they go forward if he can’t commit and commitment comes naturally to her? Their big fight happens one day when she makes him dinner at his place, and he arrives after a bad day and finds her there without permission. They have a huge fight, culminating in her storming home to her friends. After that, Parker bans him from the estate until Emma feels up to him, and tells him to go and think what he really wants from their relationship. Will Jack be able to overcome his trust and commitment issues and give Emma what she needs?

This book was as enjoyable to me as the first book. It follows the same speed as Vision in White, and there are some similarities as well. I like reading series’ because you know the characters already. Especially in Nora Roberts’ books, you suspect the love relationships in the previous books.

Emma and Jack are a too perfect for me – they are both very handsome and charming, and good people. Sometimes they seem so nice they should have halos circling their heads. No one is that nice.

All in all, if you steer past the predictability of it all, the book is a nice, easy read, perfect if you need some cheering up.