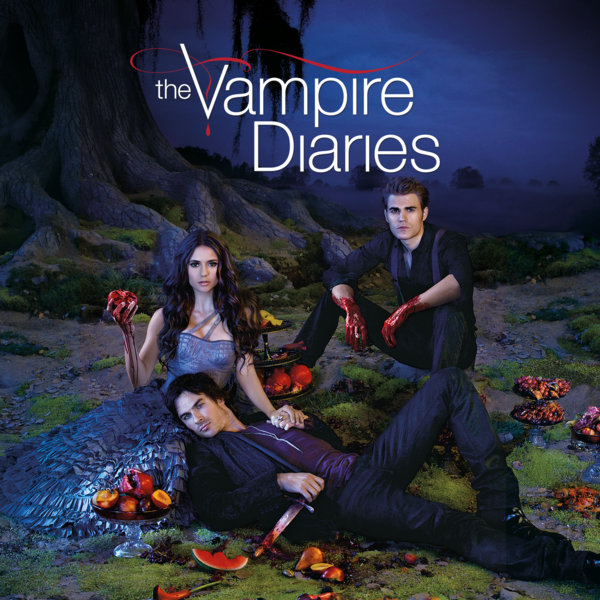 The flashbacks to Chicago during the prohibition era. I really enjoy when the show makers do flashbacks – they are really well done in the show. It is good to understand a little why Klaus wants Stefan to travel with him and is the first glimpse that Klaus might have some redeeming qualities to him.

Damon in this season is on fire. He is his usual gorgeous self and as alluring as always, but he has matured and has changed his game plan when it comes to Elena, realizing that the only way he would ever get to her would be through honesty and a fair fight with Stefan.

Jeremy’s shorter hair. Can this count as something I liked? He looks much more grown up and I am so glad that floppy nonsense is gone. The character is much more stable and that can only be a good thing. I’m happy that he leaves for a bit because his story gets a bit much at times. 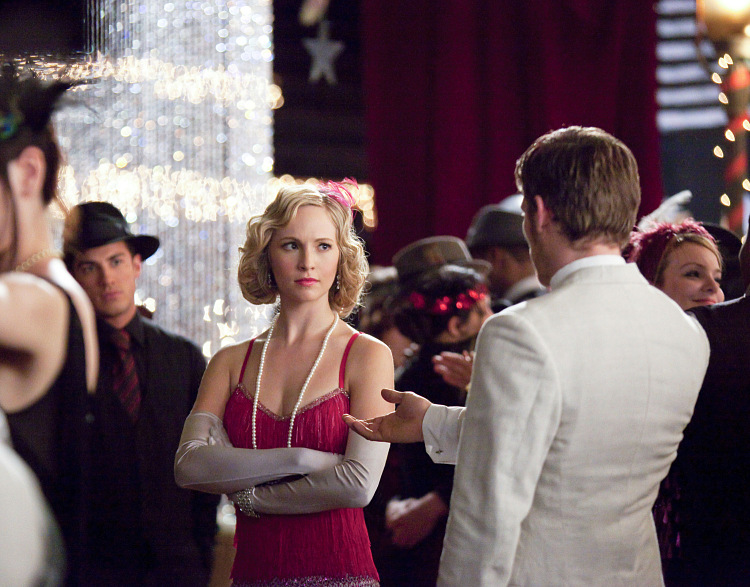 Caroline and Tyler. This is my second favorite relationship for Caroline. Actors Candice Accola and Michael Trevino certainly have enough chemistry to make their relationship plausible. I also really enjoy how far Tyler has come. He was the world’s biggest high school jock jackass punk in season one, but becoming a werewolf and dealing with everything that went down (and nearly killing Damon, FFS), made him grow up and take accountability for what he does. 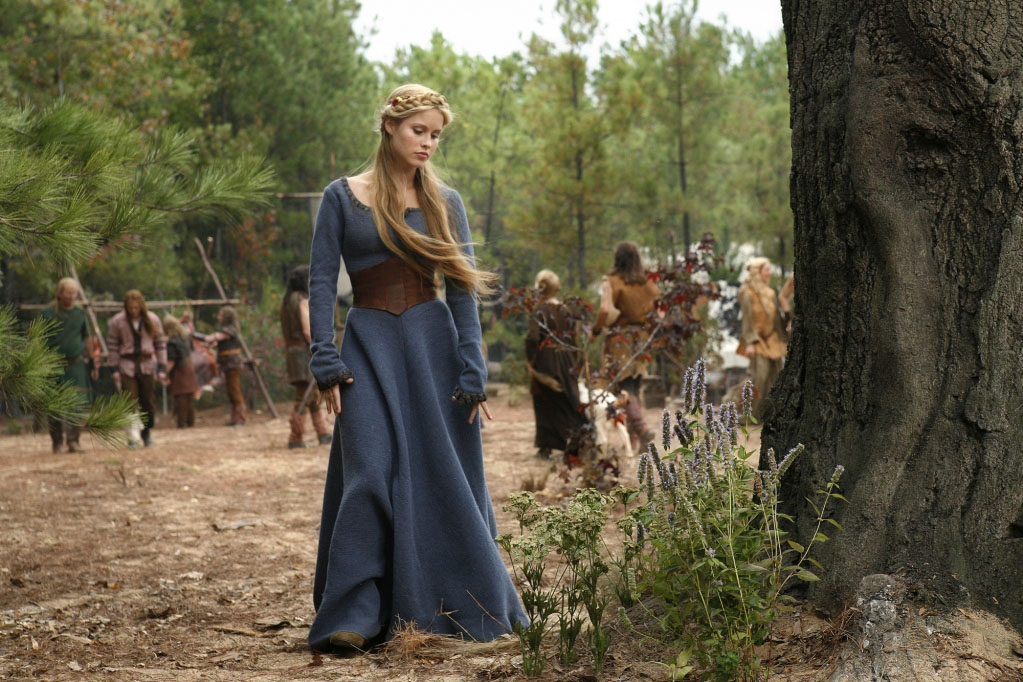 Claire Holt as Rebekah Mikaelson. She’s annoying, that is for sure, but the character is the female version of Klaus – powerful and paranoid and worried that no one loves them.

I’m still wishing that Alaric Saltzman was my teacher in high school. Not only would he have been really nice to look at, but he is badass and besties with Damon. I mean really, what more do you want from a teacher? I like that he isn’t the together guy we met in Season one and how he lost most of his ability to cope – not blaming him, his wife and girlfriend have at this point been and been killed as vampires, something that would mess most people up quite badly. His friendship with Damon is still sob worthy and beautiful, and his death made me so mad the first time around – how many people must Damon still lose?! Losing him caused a lot of pain for Elena and Damon, and the lead up to his death was so heart

Klaus – man, after killing Jenna at the end of Season 2 I thoroughly hated him. The hate is still quite strong in the beginning of season two, and his actions remain deplorable, but as the season continues you start getting a glimpse of why he is like he is, and that he is lonely and terrified of Michael. Klaus’ puppy like devotion to Caroline is gut wrenching, and can we just discuss this whole scene?!

Which brings me to Michael –I think he was legitimately badass and worthy of scaring Klaus shitless. But we can hate him thoroughly whilst we admire him, because he is the main reason vampires exist and why Klaus is the way he is. The big reveal that although he isn’t Klaus’ father, he is the father of all the other Originals, was clever and really well done. His death is also really fiery and awesome, and the tension that is in the air with the last standoff between Klaus and Mikhael is electrifying. It is also one of Joseph Morgan’s best moments in the show – the heartache and disillusionment of not being loved by his father figure is heartbreaking to behold.

Klaus and Caroline. I do enjoy Caroline and Tyler together, and the only way I would chose her to be with someone else at this point is with Klaus. She will always speak her mind, and he really is a guy that needs it. The scene below is one of the sweetest in the entire series, and it broke my heart just a little. If you haven’t seen the show yet, I think this is the first real time where you start to wonder if Klaus has redeeming qualities.

Elena – the girl has grown. She’s angrier and feels violent towards her blood bag fate. Her character is so much stronger than in seasons one and two, and we finally see some progression.

How many times must Caroline go through the same drama of a parent that wants to kill her? Her father pitching, THANKS CAROL, and trying to exorcise the vamp out of his daughter. At this stage it is feeling quite repetitive and unnecessary. Her father also – there was such a magnitude of possible ideas around him – that repelling compulsion without vervain? That could have been an incredible story line.

Jeremy seeing the dead. Why did the showrunners feel inclined to even include this? I couldn’t cope (again) with all the Bonnie business, and especially seeing Vicki back – I really hated the character. I did enjoy having Anna on again, she was quite cool and I really wanted her and Jeremy to work.

Bonnie – I’m bitching here again as I’ve done in the two previous seasons, but she’s whiney, entitled and really very bitchy towards her friends. She wears her witch crown like it’s a cross and it is too much to bear at the best of times.

Matt, who is quickly becoming obsolete.

I’ve always considered the second and third season of Vampire Diaries my favorites of the lot. The original story line was intact and they didn’t have to do any major modifications to keep things going. Overall this show has always had decent writing and production, and they’ve stayed consistent in the way they depict their supernatural creatures (I’m looking at you, True Blood). My favorite character in this show will always be Damon – so many layers. The third season has him becoming so much better, and it is probably mushy but I like how he can’t help being a better person because of Elena. The only other character that I have come to love almost as much is Klaus – talk about damaged and insecure, and his development throughout the show is fascinating and so good. My favorite female character is still Caroline – I’ve been on her team since season 1. I love that Klaus has a soft spot for her – the only chink in his armor. I really did like season 3! 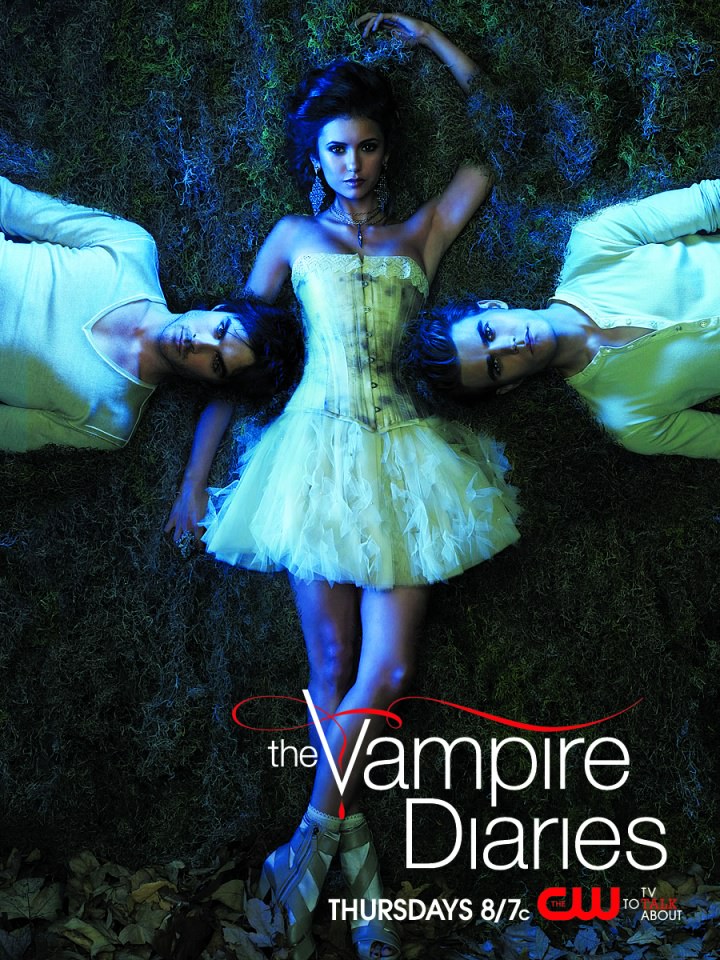 The developing friendship between Alaric and Damon caught me right in the feels, and Rick giving Damon something to drink when they all thought he would die was so sweet between them. I love Rick – he just tells it like it is, and has no problem telling Damon when he is being terrible.

Caroline Forbes’ migration to being kickass and powerful. Caroline is one of my favorite characters in the show. Becoming undead was the best thing that ever happened to her.

Damon. Forever. My love for this character is eternal. He gets hurt so much in the season and it is painful, but the way he copes without ripping people to shreds shows that he has evolved. 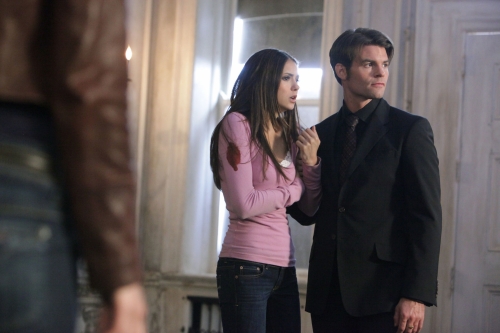 Elijah – classy, powerful, dressed like a king and sarcastic as hell. What is not to love?

The lead up to Klaus. He is evil, powerful and very strong, and everyone fears and respects him.I love this character so much. He is the perfect example of a troubled villain, and even though he is still a complete bastard in this season, he makes this show entertaining as hell.

The feels – when Tyler bites Damon – HOW did I live through the suspense the first time watching this? Hell, I’ve watched this show into season four and I still have panic attacks. We all saw how Rose ended up dying in season one, it was heartbreaking, and seeing Damon so pale and sickly had me hysterical.

Jenna dying. Man, I LOVED Jenna. She was so blessedly normal – the twenty something girl who is trying to figure out who she is in life and get through college, suddenly expected to take care of people (I can relate more with her situation than you will ever know). Her anger and feeling of betrayal when she found out about Isobel and vampires and that every single person she knows lied to her was completely understandable. Her death was so sad and heartbreaking, and I was really so mad at Klaus at that stage (I still am, he is really not anywhere where he is in redemption with me).

John’s redemption. No one liked John – he was such a tool and obviously the bad guy. At the end he redeemed himself, and although I wasn’t sad that he died (he tried to kill Damon one time too many), it was still a moment where you caught a glimpse of why he was the way he was.

The Matt subplot. He is in the way, his constant insecurities are so annoying and I am heavily invested in watching the rest of the show unfold. 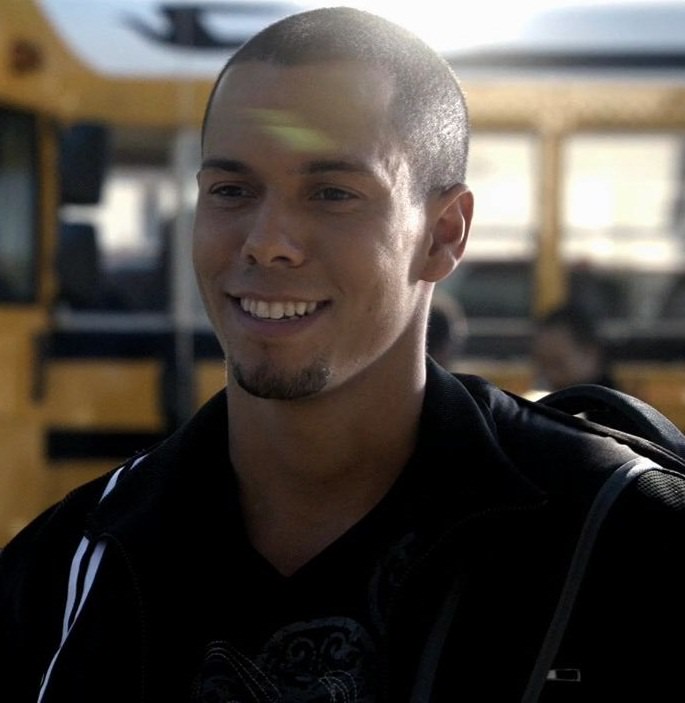 Luca – what an annoying twat. His father was okay, but Luca was just there as collateral damage.

I understand why the werewolves were incorporated and the story developed because it links to Klaus’ identity strongly. It felt a bit too much at time. It was also completely dumped for a couple of episodes then picked up in the end to just make Klaus’ story work out properly.

Isobel – I’ve never liked her. Elena has moments where she is pretty dang annoying, but with parents like John and Isobel, who could blame her?

Bonnie is still over annoying. I swear, everytime I think she will have a use she just screws up, or isn’t strong enough. Essentially, she’s completely useless in the story. Her crying/screaming/upset repertoire was too much to handle, especially in the end.

Jeremy – he is still in the stage where he must get to a place where I can root for him. At least he cut that stupid hair better. I am glad he didn’t die though – the collateral damage was insane enough at the end of Season two without him being added.

Carol Forbes finding out twice about vampires in this season. It is really not the most crucial plot line of the show, and it was a waste of screen time when other big things went down. It also ties in with the Matt story and I just don’t see for the need for it.

Vampire Diaries season two is as good as it got in the series. The story is entertaining and gripping and everything falls together perfectly in the last few episodes. The romance, teenage drama, great plot twists and even greater characters entertained me to no end throughout season two. 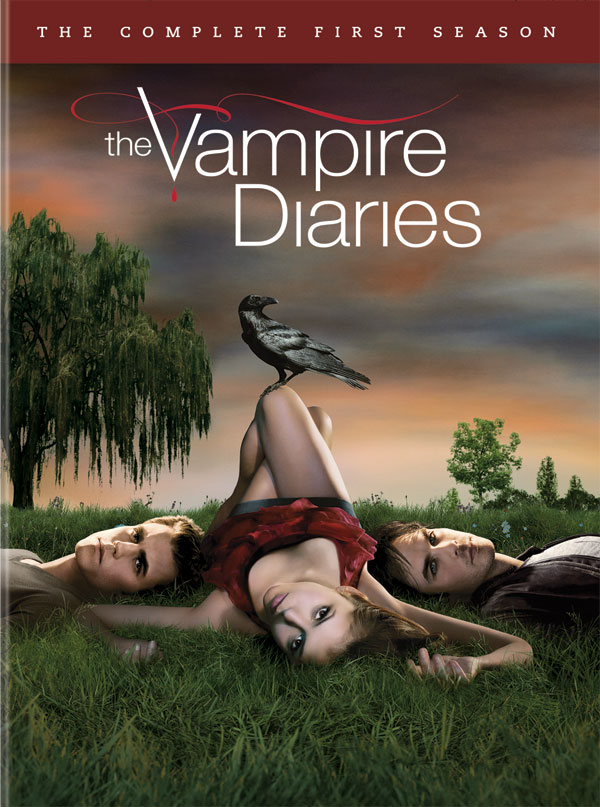 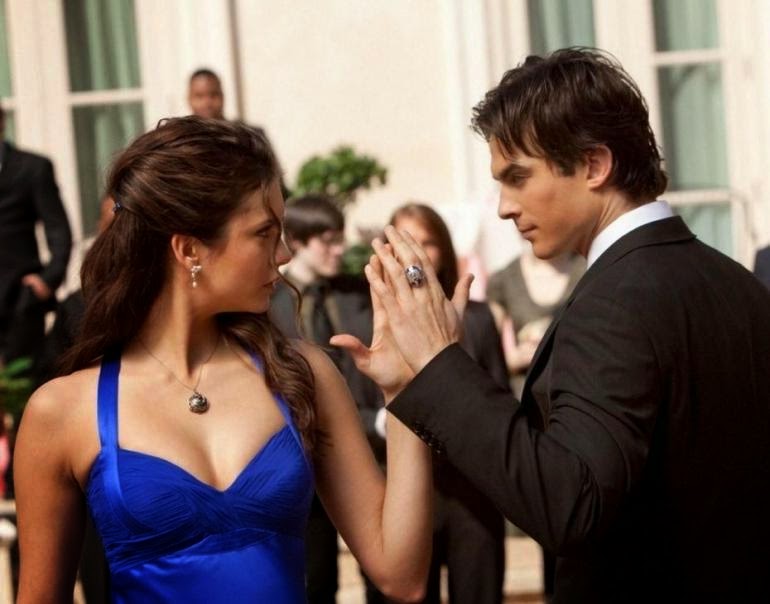 What I didn’t like/wish they explored a bit more:

After a shaky pilot episode Vampire Diaries Season one is so much fun to watch. The characters have surprising depth, there are a few twists and turns that manage to be shocking. The level of teen drama is quite high and everyone is very dramatic, but it is really entertaining and rather intense. 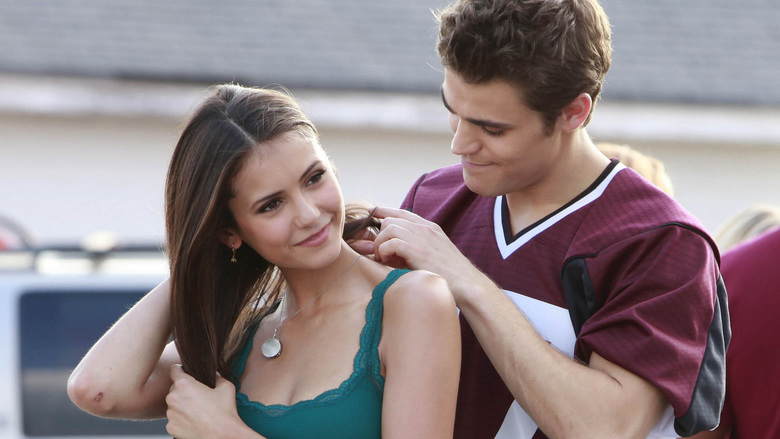