Vivienne de la Mare waits nervously for the bombs to come. Instead comes occupation. Nothing is safe anymore. But was anything truly safe before?

The façade of the perfect wife, with her husband fighting on the frontline, cracks under the strain of the lie. Her new life is one where the enemy lives next door. Small acts of kindness from one Nazi soldier feels like a betrayal. A forbidden friendship in a frightening world. But how can you hate your enemy when you know his name, when he makes you feel alive, when everything else is dying around you?

Vivienne is fighting her own private war. On one side, the safe, secret, loving world she could build with her captain; on the other, virtuous loneliness and danger. It’s time for Vivienne to choose: collaboration or resistance…

A two word review of The Collaborator would be “thought-provoking”. Set in the Crown Dependency Island Guernsey during WWII, The Collaborator raises some interesting questions. Can we really call someone our enemy without them having personally slighted us? When they appear to be kind and thoughtful and ready to help out? When they are your enemy based on a war that is not occurring in front of your eyes but somewhere far away?

Leroy goes all out by writing her male lead as a German soldier, the most reviled characters of WWII. She refrained from writing Gunther as SS, because there would be no redeeming qualities in such a person and her book would have flopped. Gunther is merely a man that is fighting for his country and actually grateful to live on the small island and not to further Hitler’s mad plans around the world. He misses his old life, and Vivienne and Gunther are able to create some fragile contentment in their lives for a while. As the war continues Vivienne finds it more difficult to remain impassive about it and questions how much Gunther is also turning a blind eye too. Can the two exit the war unscathed?

Leroy wrote this book with an underlying tension. The feeling is so dreary and tense. It brings the reader to ground level and makes you question your beliefs about a lot of things – religion, the Germans in a time where everyone hated the Germans. Vivienne starts to crack as the soldier’s wife – she knew her husband cheated on her before the war, he made her feel inadequate and he was already emotionally removed from her when he left to go to war. Can we blame her for cracking? Do we dare? Max and Gunther, part of the German army, are seemingly good men fighting for their country’s honor. They aren’t evil bastards running death camps, they are soldiers working on a small island doing as they are instructed. They face harsh punishment and certain death if they rebel. Some in their group aren’t as kind as these two, which leads to some complications later on as one would expect.

What I consider a huge improvement from the previous Leroy novel I read, The Lake House, is that Vivienne actually cares for and considers her children a great deal. Millie and Blanche are a few years apart and both pose a different challenge to Vivienne – Millie is young and requires a lot of care, while Blanche is on the verge of the rest of her life and struggling to remain a young teenager when the world around her is crumbling and harsh. On top of these troubles is Vivienne’s elderly mother-in-law, who can be extremely forgetful and dangerously attentive at times. So can we really judge her for seeking her comfort with a kind, understanding German soldier? I couldn’t.

The book has some surprises in store – the awakening of Vivienne’s determination to do something for the prisoners of war, the twisting at unexpected times and the very sad and bleak end. I’m not usually one for such a depressing end, but it suited the tone of the book – war is a cruelty that changes people and destroys lives.

The Collaborator probably wouldn’t be enjoyed by everyone. I liked it though – it kept me in such suspense most of the time and I kept thinking about it while I wasn’t reading it, a sure sign that a book is a good read.

Plot: Since Louisiana cocktail waitress Sookie Stackhouse has so few living relatives, she hates to lose one – even her cousin Hadley, undead consort of the vampire Queen of Louisiana. Hadley’s left everything she has to Sookie, but claiming that inheritance has a high risk factor. Some people don’t want her looking too deeply into Hadley’s past, or Hadley’s possessions. And they’re prepared to do anything in their power to stop her. Whoever it is, they’re definitely dangerous – and Sookie’s life is definitely on the line…

I reviewed these books way back here, and boy, I seemed to have hated it quite a bit back then. It sucks, because I really seemed to enjoy it this time around. I was a bit worried that I would get confused because I started in the middle of the series, but luckily Harris doesn’t mind reminding her readers of previous events (incessantly so) and repeating information all the time here and there. Is Definitely Dead a literary masterpiece? Oh hell no. What it has is very grownup vampire business, and it a significant amount of sexy time in it, and the characters have a way of talking southern that is so obvious that the author really wanted them to sound southern. So if you don’t mind some hillbilly vampires, you are headed in for a good time.

Anyway, I enjoyed the following:

Quinn – he comes across as so big and masculine and human. I liked that. I know the whole story is mostly about Sookie and vampires, but this guy was at least partly human and I thoroughly enjoyed that. Let me just say it – totally my type of guy.

Bill fessing up to his true reasons for arriving in Bon Temps. I am so not team Bill, I’ll tell you that. He’s just too ick and grouchy and needy and a general pain in the ass. Sookie is welcome to choose Eric, Quinn, Alcide or even Sam Merlotte, but I won’t deal with her ultimately choosing Bill.

Sookie having fairy blood – her breakdown about it was super annoying but I did appreciate it that it explained the attraction all the supernatural creatures had towards her.

It annoyed my quite a bit that so many things happen to Sookie. Yep, I get that she’s the heroine and I get that things need to happen to move the plot along, but sheesh, if someone isn’t killing her cousin they are trying to kill her. The attack on Sookie and Quinn by the young vampires?Quinn taking her to that strange bar? Is he a dumb dumb? Like WHY? Jake Purifoy? I mean come on, he was written into the story for absolutely no reason – and I’m not on board with what happens with him in the next book either. I think adding so many witches was the first mistake Charlaine Harris made in this series – You can only pile so many supernatural creatures into a book and expect it to work out.

I also have some grief with the Queen of Louisiana. If we can focus on the little fact that there is a vampire Queen for Louisiana first. It is so preposterous. I have no idea about the gross capital income of that State or even its’ size, but allocating a Queen to it seems quite severe. And then her name is Sophie-Anne LeClerq. I understand that I’m dealing with a book where the main character’s name is Sookie Stackhouse, but I need good names for characters or I always feel a little bit done in. Sophie-Anne is also a bit of a pain and seems to have no real reason for her inclusion in the story except for Sookie to meet hot men, get rich and travel. Okay, apparently I need a Sophie-Anne in my life, so there we go.

I didn’t like that Alcide was just cut from the book. I love me some Alcide man. The fact that they chose to keep the Pelt melodrama and chuck Alcide was yet another bad choice, but anyhoo.

It sounds like I wasn’t all that fond of the book – but I actually was! It is in a nutshell some very vacant reading, it doesn’t require any brainpower (I have none to spare while exams are ongoing) and the story is fun. If I can deliver some honesty here, while I am MUCH more tolerant of Twilight than the usual populace on the internet, I do think the idea of virgin 100-year vampires is ludicrous. The vampires might have zero sexual inhibition in The Southern Vampire Mysteries, but at least that is more believable than all that prudishness.

Have you read the Southern Vampire Mysteries, and in particular Definitely Dead? What is your opinion of the book? Let me know! 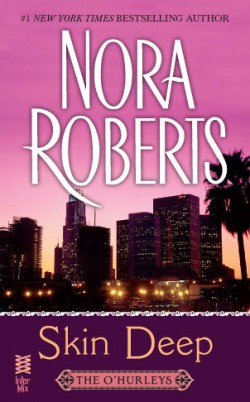 Regrets. Even movie stars have them. Chantel O’Hurley’s family was far away, her mansion was empty, and when she was threatened, there was no one to turn to. There was certainly no comfort in Quinn Doran. He looked like he’d been carved out of stone and he was just as intractable. But in that hardness was a promise: “I will keep you safe. I will bring you home.” But could she get him to stay?

Usually the book with the extremely beautiful woman in irritates me the most in the Nora quartet/trilogies, but I enjoyed this one. I think Chantel O’Hurley was decently written and NR took such lengths to make her more than a pretty face. I thoroughly enjoyed Quinn’s extremely abrasive attitude and thought it well suited to his role in the book. The stalker Chantel had was creepy but I thought that didn’t end too well – I hate the whole he’s-ill-lets-forgive-him routine. Such silliness. If someone stalked me, I would NOT be that nice. The book was enjoyable and a lot more probable than its predecessor. Good times!

If one cannot enjoy reading a book over and over again, there is no use in reading it at all.

I have always loved reading. I cannot understand anyone who doesn’t  So many poetic things can be said about reading, or writing, but at the moment I can only think to say that it is the one thing I love with a pure heart.

I have decided I want to read 100 books this year. I do think this possible – I read quickly and easily.

Rereading within 2013 does not count.

Rereading from previous years only counts once.

New Genre’s needs to be explored.

If you have any ideas to books I should read, drop me a comment 🙂