Plot: A teenager teams up with the daughter of young adult horror author R. L. Stine after the writer’s imaginary demons are set free on the town of Madison, Delaware.

As mentioned, Goosebumps surprised me – I don’t enjoy these silly comedies often. The material was great, the monsters managed to be either rather scary, disgusting or slimy and the ending was solid, leaving an opening for a next movie if they wanted that on the cards. It’s definitely a movie that can be watched as light entertainment and really appropriate for any age group up from 11 – don’t show it to the little kids as it might frighten them!

Yep, it’s Friday again (I know you all really hate Fridays ;)). I try to keep Fridays unscheduled to allow space if inspiration strikes – I’m totally kidding, I am usually over scheduling stuff after the fourth post for the week has been uploaded. I’ve been thinking about books a lot – I haven’t been reading as much as I enjoy and need because life has been so insane the last few months, but I’m slowly getting back on the book train again. I’m currently reading The Brightest Star in the Sky by Marian Keyes and Evening Classes by Maeve Binchy.

All this thinking about books lead me to think about what started this insane reading passion I have. It started pretty early on in my life, somewhere between Enid Blyton and JK Rowling – these ladies are my heroes and they have incomparable talent. So in the spirit of books and childhood and reading, I compiled a list of my favorite books I read as a child. Read, enjoy, and let me know which books you adored!

Enid Blyton has a descriptive writing style that places her in an elitist class of her own as an author. I’ve read a number of her books, and this series, as well as the Famous Five are wonderful books full of mystery and childhood adventure. I remember a particular trait of Blyton very well – her description of food! Wow, this lady could make me ravenous by describing lunch. The food was always succulent and plentiful, and the characters always had the most amazing adventures before settling down for lunch. The books are also full of adventure – secret passages, saving dogs, climbing through wells, small secretive towns – everything that makes a child want to believe that you can have fun while saving the world!

JK Rowling: Harry Potter and the Prisoner of Azkaban 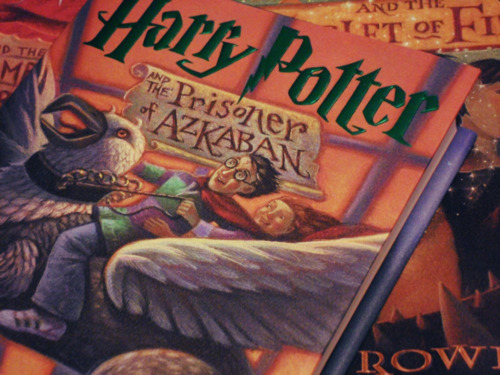 JK Rowling could really take over this entire post if I let her, because Potter was the very definition of my childhood. During my recent move I found my Potter scrapbook where I had pasted every article, picture or reference regarding these books I could find. It was vaguely embarrassing to page through but I was fangirling nonetheless.

I’ve often mentioned that these books are some of my favorite one’s ever – I’ve never felt that I’ve outgrown them and they are special to read every single time.  The Philospher’s Stone takes you through that pity for the life young Harry has at the Dursleys’, the excitement of finding out he is a wizard, the wonder of the first exploration of Hogwarts and the daring courage of an eleven year old boy to stand up against the monster who murdered his parents. The Chamber of Secrets is still full of exploration, Harry learns more of Voldemort’s past and how he was already evil as a student, he learns what his strange snake speaking ability means and that similarity between him and Voldemort and, very importantly, he finds the first Horcrux although he has no idea at the time what it means or even what it is.

The Prisoner of Azkaban brings us a Harry that is quickly approaching his teenage years – he starts noticing girls andhis temper is all over the place. It also introduces us to a fatherlike figure for Harry, Sirius Black and takes you through the unbelievable glory of Harry and the Gryffindor team finally winning the Quidditch cup. It is as excellently written as what comes before and after it, but I really enjoyed this book more than the first two. It carries great significance in the Potter world because if Wormtongue hadn’t escape Voldemort would never have risen again (OR WOULD HE?) and Harry would never have lost Sirius (again, thanks for that, Rowling).

(Do you see how I can make this entire post about Potter if I allow myself?)

These books terrified the crap out of me as a kid, but I could never stop reading because it is so fantastically written. I especially remember reading one of the novels where a sponge was the villain, and believe it or not, that was pretty creepy to twelve year old Natasha. I also remember the notoriety the writer achieved in school – there was rumors if you properly realigned the letter in his name you would find “satan” written in there – yep, once again, an utterly impossible event that terrified twelve year old Natasha.

The books are pretty fun though, and I found something in the recurring theme that evil can’t be fully eliminated interesting. I can see myself rereading it at some stage, only if it is to see if sponges still terrify me. 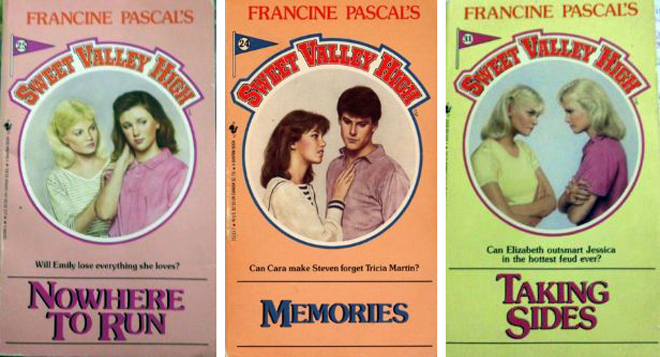 These books, also a series, epitomized the highest living standard I could ever hope to achieve as a teenager. I mean – TWINS firstly: Imagine how awesome life would be if I had a twin! Then, super-hot boys pining away for you – no girl would deny the need for that one. Jessica’s life as a cheerleader seemed so glamorous and Elizabeth’s cool and calm confidence in her brains and abilities – these two were the combination of everything a teenager would want to be – popular, pretty, smart, confident (I see what you did there, Pascal)

These books were available in our school library and my one friend and I devoured these books. They provided endless entertainment, impossible situations and a perfect setting for teenage fun.

JRR Tolkien, The Lord of The Rings

I first read the LoTR trilogy when I was eleven years old. My dad, recognizing a fellow book junkie, loaned me his battered mammoth copy of the three books. I can’t really remember if I took everything in at that young age, but I read it about three times that year. Eventually it got superglued into my brain and made me the Tolkienista I am today.

I adore this series. I fully agree with people who moan that the books are mostly about walking and take ages to move between scenes, but Tolkien was an exemplary writer for his time. I also applaud the female characters in his novels, although it saddens me that there were no ladies in the fellowship. These books are a large project to undertake and to be perfectly honest I haven’t had the guts in the last few years with life happening and all. However, I do think that it is the right time again, just to see if I can still reach that fanatic reading level the munchkin me was known for! 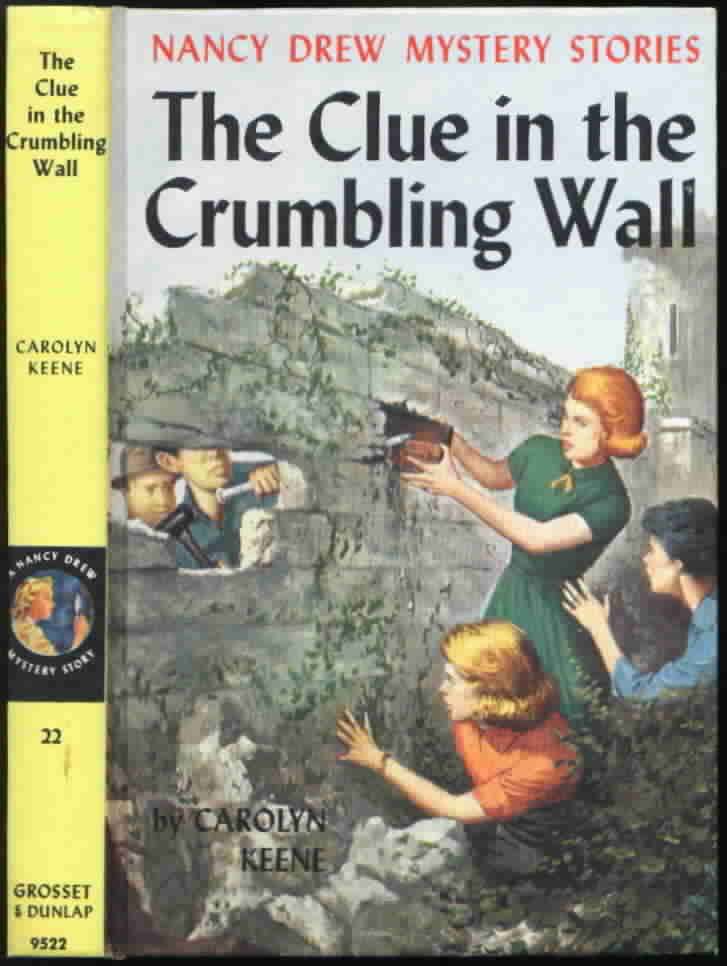 The Nancy Drew series is a quite important read for a young girl – the first book was released in 1930 – a time where women were expected to wash dishes and have babies, and Nancy came along and solved mysteries and took care of herself. Yay for feminism!

These books are well written and are intricate reads – there is always something unexpected and nothing is ever quite what it seems. I haven’t read even half of the books available in the series, but the one or two of these I have read were wonderfully done. 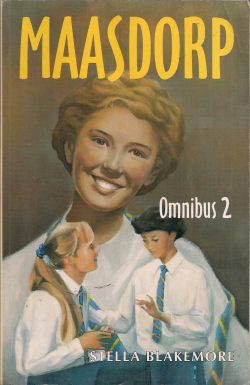 No we get to the more obscure and lesser known books of this post – they are in Afrikaans, so I don’t think the majority of my readers would have heard of them J

Afrikaans literature is surprisingly good for such a small language. I think it is because our language developed quickly and stemmed from a language that was already at the height of its’ existence (Dutch).

The Maasdorp series is extremely old – it was also written in the 1930s. It follows the tale of Kobie Malan and her escapades in the boarding school Maasdorp.

These books are really well written and extremely fun, although I think it must be mentioned that there is something specifically precious about a book that is written in your own language. That, and the midnight feasts and extravagant plans these girls undertake while still excelling at school, provided endless entertainment and addiction as a young girl.

This series is also Afrikaans, but it is much more recent (somewhere in the 1990s). To perfectly sum up these books would be to say that it is a more innocent version of Sweet Valley High (Afrikaans parents are particularly strict and traditional). I loved these books because between the two main characters Shani and Sunette they had kidnappings, suicides, alcoholism, anorexia, holidays to the South-African coast and London, parties, stalkers and numerous other dramas scattered between their friends all in one year. I will still pick up a book in this series if I spot it in a shop. It is so much fun to read!

Well, there you have my list. I’m sure it is not even nearly complete, though I did my best! Drop a comment and let me know which books were your favorites as kids!