Hi there! It’s been ages since I’ve posted a Five Things Friday post – sorry about that. I’ve been crazy busy trying to finish my book challenge, reading enough books for it, posting them before the deadline (which is the end of February and I still have 15 books left!). I decided to kick start the 2014 leg of the five things series by posting five movie deaths that made me shed a tear (or at least gave me some shiny eyes). I’ve never been one to tear up in movies, but there have definitely been a few where I’ve felt incredibly sad when someone died. Enjoy!

Boromir in the Fellowship of the Ring 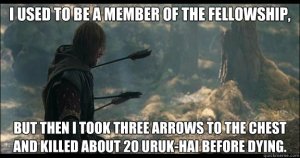 Through the entire journey from Rivendell, the snow on the Mountains, Moria to the Orc attack, Boromir struggles to fight the lure of the Ring of Power. Eventually the urge becomes too strong and he tries to take the Ring from Frodo. The Orc attack happens then, splitting the party up, but Boromir redeems his honour by dying for the Hobbits.

Boromir’s death scene is one of the most powerful of the movie and perhaps even the entire trilogy. It is about him reclaiming his honour and also about him declaring Aragorn his king.

It is a Baz Luhrman film where everything feels real. Satine is lying on the floor dying in a beautiful Valentino dress just after declaring her love for Christian. The cast of Spectacular Spectacular are celebrating the success of their show. Satine just falls to the floor and Christian notices.

Jack Dawson nearly didn’t make it onto the list. This wasn’t Leonardo DiCaprio’s best role, but he did a good job. What really got me wasn’t Jack floating down in the icy ocean; it was Rose’s subsequent actions and will for survival. Letting him go and choosing to live is the most powerful choice she made in the movie, including her decision to leave her wealthy lifestyle behind to be with him. Her courage made me very sad.

Dobby the House elf in Harry Potter the Deathly Hallows 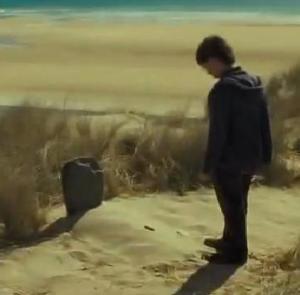 Although much in the movies doesn’t do justice to the books, Dobby’s death was pretty decently done. The entire character was a success from his inclusion in the Chamber of Secrets (although WHY they didn’t include him in the subsequent movies – Goblet of Fire, Order of the Phoenix and the Half-Blood Prince is beyond me because it signifies Dobby’s  importance in Harry’s life – his brave death and Harry’s reaction was really well done.

And the one movie where I actually started crying: If Only (2004)

The entire movie you see how Ian Wyndham (Paul Nicholls) finds it easy to forget about his girlfriend Samantha’s (Jennifer Love-Hewitt) existence. Then she dies and Ian gets to turn time back and relive her last day. He knows what will happen, you do, and yet you can’t help but hope she will live. And then she does. Ian dies in her place and she gets to carry on. In that moment you realize that he really loved her incredibly much even though he forgot to show it.

I cried so badly. It is the saddest moment where ion jumps over Samantha to protect her as the car crashes. Her realizing what his strange behavior really meant and that he was reliving the day and choosing to save her.

What movies had great death scenes that made you sad?