Happy Friday! I was watching Gilmore Girls this week where Rory gives her graduation speech, and that, and a conversation with Zoe, prompted me to compile this list today.

I’ve always read that people give speeches that move other people into action, or make them teary eyed and super emotional, but there aren’t many movies or shows that have actors/actresses strong enough to properly convey the emotion in a way that the speech becomes a powerful entity.

However, I’ve managed to come up with five speeches where the words, combined with excellent acting and setting, impressed me beyond belief and nearly made me cry.

Benedict Cumberbatch is without a doubt the most perfect person to ever play Sherlock Holmes, a high honor since Robert Downey Jnr did a very decent job in the 2009 and 2011 Sherlock Holmes movies.

Sherlock’s Best Man speech starts off delightfully awkward, just like Sherlock himself. As the scene progresses, you start feeling vaguely uncomfortable and pity the bride, groom and guests alike. Then Sherlock stuns the crowd with a moving tribute to Watson’s character, words kinder than anything Sherlock has ever uttered in his life.

It is beyond a doubt one of the best scenes I’ve ever seen in a show. It’s so unexpected and emotional, beautifully spoken in Cumberbatch’s amazing voice, and so appropriate for someone who has gone through and seen what Watson has seen.

Theoden’s speech at the Ride of the Rohirrim

I’ve referenced this scene many, many times as one the greatest scenes of all times. I can’t watch it without having goosebumps or wanting to jump on my own horse(I don’t have a horse) and go fight some Orcs. Bernard Hill did a phenomenal job in his portrayal of Theoden. Theoden has a sad and moving story: he has always felt that he is not worthy to be amongst his great forefathers; he has spent too much time listening to Wormtail’s lies and lost his son on the battlefield. When Gandalf arrives in Rohan, Theoden is a ghost of a man he once was. With Gandalf’s force help, he manages to shake Saruman’s hold on him, acknowledges his power and the loyalty he owes Gondor, and becomes the King he has always been destined to be.

Theodentakes his men through numerous battles and finally rides to the aid of Minas Tirith, under attack from Sauron’s fleet. As his party arrives grossly outnumbered to the orcs, Theoden gives the speech he has been born to give: giving his men courage brutality and death to help their friends.

Aragorn’s speech at the Black Gates

Lord of the Rings is obviously a trilogy with great speeches and epic moments, and this scene also stood out for me: Aragorn taking his small party to the Black Gates to lure Sauron’s eyes away from Mordor, where Sam and Frodo are desperately trying to fulfil their quest.

Yes, this one might be vastly inferior to those previously mentioned, but I loved the speech Rory gave at her farewell. The entire episode has Rory stressed out and overworked, she is snappy with absolutely everyone, she has just heard that Dean is getting married and that Jesse left Stars Hollow without even saying goodbye or giving an explanation. She’s valedictorian but she’s not even feeling the pride that should accompany it because she has so much on her plate. Lorelai makes her realise what an achievement it is and when it is time for the speech, Rory thanks her grandparents and mother in such a way you can’t help but tear up. I thought it was unbearably sweet and with Luke and Jackson doing the ugly cry gave me a good chuckle. I think I particularly liked this scene because the only problem I’ve ever had with both Lauren Graham and Alexis Bledel was that they didn’t really dotears very well.

Kat’s speech/poem in Ten Things I Hate About You

This last spot was a killer to fill. I had some ideas, but wanted the last one, even though it’s fifth on the list, to be worthy to stand with those that came before it. Kat’s interpretation of the poem they’ve been assigned is done so beautifully – she’s hurt because she’s found out Patrick was paid to take her out on dates just so that Bianca could date sleezeball Joey.

What are your favorite speeches? I’m sure I missed/forgot plenty of good ones, so let me know! 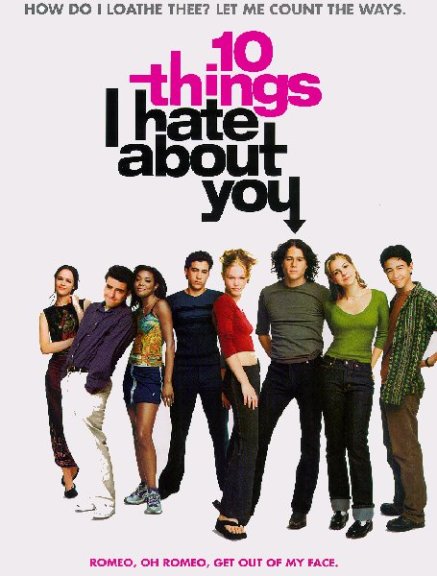 Cameron James (Joseph Gordon-Levitt) is a new student at Padua High school. He is befriended by Michael Eckman(David Krumholtz) who shows him around the school. Cameron spots Bianca Stratford (Larisa Oleynik) and her friend Chastity (Gabrielle Union) walking through the school and falls in love. Michael warns Cameron that they are the pretty, popular girls and that Joey Donner (Andrew Keegan), the school hunk, has his eyes on Bianca. Cameron pleads his true love and Michael helps him secure the job of Bianca’s French tutor even though his skills are rudimentary.

Bianca really wants to date Joey Donner. She fights with her father about it but Mr. Stratford (Larry Miller), a gynaecologist refuses to let his teenage daughters get impregnated. After another fight Mr. Stratford says Bianca can date when Kat (Julia Styles), her abrasive sister, does. This seems as likely as world peace because Kat isn’t the world’s most approachable person. Kat openly mocks Bianca for wanting to date Joey because he is such an idiot.

Kat has her own issues. She is still dealing with her mother’s death and her father’s insistence that she attends a university close to home instead of Sara Lawrence where she wants to go.

Cameron wastes no time and asks Bianca on a date. She says she isn’t allowed to date until her sister does. It seems like there is an easy solution – find Kat a date – but even the hardiest of bad asses don’t seem keen on dating Kat. The ever trustworthy sidekick Michael identifies Patrick Verona (Heath Ledger) as a candidate. He is as notorious as Kat and not afraid of anything.

Patrick laughs at the suggestion. Michael uses his brilliance and gets Joey Donner, who isn’t the smartest peanut in the packet, to finance their mission. By lying and claiming he wants fame by association, he gives Joey the idea to pay Patrick to date Kat and thus being able to date Bianca. Cameron plans to have wooed Bianca and stolen her heart by that time.

With the monetary compensation, Patrick agrees. He tries to woo Kat but she is very prickly about being wooed. He eventually gets her to attend a party with him and that means Bianca can attend. Bianca’s time is monopolised by Joey and that upsets Cameron because he has been working hard to win her heart. Bianca has a miserable time when Joey shows her his model poses and she is bored out of her mind. She asks Cameron to take her home and he agrees despite still being angry with her. She kisses him and Cameron is very happy about it.

At the party, Kat gets very drunk and dances on a table. Patrick takes care of her and helps her stay awake when she bumps her head. She tries to kiss him but he gently refuses because she is too drunk. This makes Kat withdraw again. To get back in her good graces, Patrick gets the help of the school marching band and he sings a song for her on the pavilion in front of the whole school. He gets detention but Kat forgives him and helps him escape detention in a very unique way. They go to play paintball and they finally kiss there. Patrick asks her to the prom but Kat says no and that leads to a fight. Kat eventually realises she was wrong and meets him there. Joey shows up and asks for Bianca and Mr. Stratford has great pleasure closing the door in his face because Bianca went with Cameron. Joey is furious and takes Chastity to the ball. He hits Cameron which motivates Bianca to break Joey’s nose. Joey spills Patrick’s secret and Kat about being dated so her sister can date.

How will Patrick get Kat to forgive him and take him back? Will Kat be allowed to attend Sara Lawrence?

I really love Ten Things about you. It is so much fun. It is funny and entertaining and sweet. I’ve seen it about a thousand times and it never stops being entertaining. It has all the elements needed for a teenager chick flick to be successful: some nerdy guy set on getting the prettiest girl, a douche bag jock intervening with everyone’s happiness and a couple destined to fall in love.

Heath Ledger is so gorgeous in here. He is just so charismatic and beautiful I literally feel the cracks form in my heart. He is the perfect bad boy every girl wants. The “you’re just too good to be true” scene is one of the best scenes ever created in the history of film. That smile just kills me.

I love Kat’s bitchy, abrasive behaviour. I love the ridiculous outfits and hair. It is so 90’s.

Obviously, I just love this movie. Go watch it.