The movie starts with a flashback, showing Richard Parker (Campbell Scott) on a plane, uploading files. His wife Mary (Embeth Davitz) heads to the bathroom and Richard is attacked by an assassin. Richard manages to upload the data just before the plane explodes, killing everyone on board.

Years later, Richard’s son peter is busy saving the world, disguised as Spider-Man. Spider-Man is regarded by many as a vigilante, but it is clear that he is helping rid Manhattan of criminals. He catches Aleksei Systevich (Paul Giamatti) who is trying to steal a truck from Oscorp containing plutonium vials. Spider-Man saves the life of an Oscorp employee, Max Dillon (Jamie Foxx), a guy with serious confidence issues who regards himself as unimportant. Spidey tells Max that he is very important and that he is his Spidey’s friend. Gwen Stacy (Emma Stone) is on the phone with Peter, asking him where he is. Peter sees a vision of George Stacy, Gwen’s deceased father who had asked Peter to steer clear of Gwen for her safety. Later that night he ends their relationship again, trying to honor that promise he made. 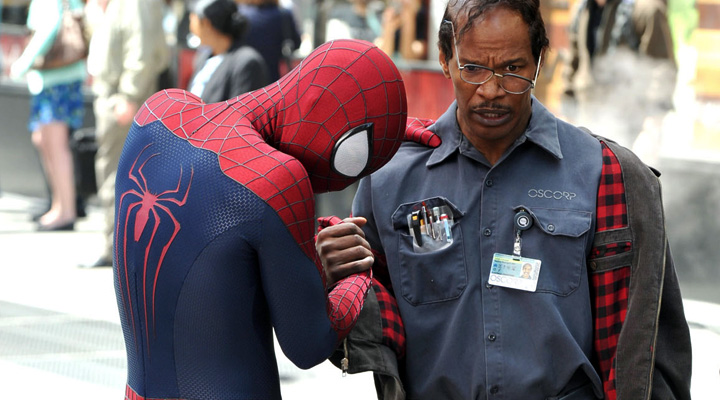 Harry Osborn (Dane DeHaan) returns to Manhattan to visit his dying father, Norman Osborn. Norman, the CEO of Oscorp, tells Harry that he is a disappointment to him and that the disease that is killing him will kill Harry as well unless he manages to find a cure to it. Norman dies, leaving his young son as the CEO of the billion dollar empire. The board of Oscorp is a bit worried and Harry quickly makes enemies with them. Peter, Harry’s old friend, visits him and after a bit of awkwardness they connect again.

Max becomes obsessed with Spider-Man. He is still being bullied at work and he is ordered to fix some faults in an Oscorp lab on his birthday. He loses his footing and falls into a tank with modified electric eels and they attack him, mutating him into Electro. He heads towards Time Square, confused, and Peter rushes to him after hearing Gwen might be heading to England on scholarship. Max causes a blackout with his surging power, but Spider-Man is unable to calm him down when the police shoot at him. Max is taken to the Ravencroft Institute for further investigation.

Harry is worried when he starts to see his disease developing. He realizes that Spider-Man is an example of his father’s successful research and thinks that some of Spider-Man’s blood will save him. He asks Peter, who sent in a picture of Spider-Man, to contact him and ask for his blood, obviously not knowing that Peter IS Spider-Man. Peter is worried that the blood will make Harry sicker or make him something dangerous, as previously seen. They part with bad blood between them. The Oscorp board-members rock up and frame Harry for Max’s accident and he is successfully removed as CEO. Harry’s assistant tells him of equipment and venom that can save him, hidden somewhere in the building. Harry goes and talks to Max, asking for help. Max agrees and kills his captors. They escape, Harry injecting himself with the venom. What will happen to Harry and Electro? Can Spider-Man save Manhattan once more and will Harry ever find out that Peter, his friend, denied him blood that could save him? Will Gwen go to England or continue risking her life to be with Peter?

I really enjoyed this. I know a lot of people had some issues with it, but I thought it was really entertaining. The special effects were sound and I liked how Peter Parker developed, fought with himself and his morals and how he constantly struggled with his feelings for Gwen Stacy compared to the promises he made to her father. The chemistry between Garfield and Stone is really strong and they make a very strong pair on screen. I love Spider-Man’s cocky attitude and humor. He is really funny and I had a few good laughs during the movie.

I thought Dane DeHaan was excellent as Harry Osborne. He was so sad and broken by his horrible father and he really tried to be a good guy. I liked the relationship between Peter and his aunt, and how sad it was when she thought he was seeking information on his parents because she wasn’t a good enough mother to him. I like how they give a bit more clearance where his father went and what exactly happened there and how it affected Peter. I thought the special effects were well done, both on Electro and the Green Goblin. I loved Electro, but thought he and the GG should have been more developed and gotten up to more nonsense than they did. Jamie Foxx was thoroughly entertaining as Max, surprising me with how well he played a geek who really didn’t fit in and was bullied by everyone. I had sympathy with his character and understood why he went crazy when he finally had a bit of power.