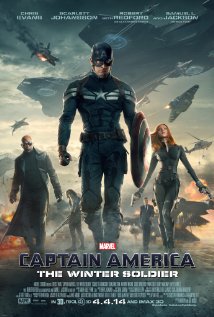 Steve Rogers (Chris Evans) is living in Washington and learning to live in the modern world. He still works for S.H.I.E.L.D. He meets war veteran Sam Wilson (Anthony Mackie) and makes a new friend in him.

Steve is picked up by Natasha Romanoff (Scarlett Johansson) and they help save a SHIELD vessel from Algerian pirates. Natasha takes information from the ship’s computers on Nick Fury’s (Samuel L. Jackson) orders, and Steve is upset because he is being lied to. The next day, Steve confronts Fury and Fury shows Steve SHIELDS latest developments – a large trio of helicarriers that is set to enforce world peace.

Nick Fury isn’t able to crack the data that Natasha took from the ship. It is odd, because as the director of SHIELD he has access to everything. On his way to see Maria Hill (Cobie Smulders) he is attacked in his vehicle and the vehicle is torched by the Winter Soldier. Fury manages to make it to Steve’s apartment and gives Steve the data and the warning to not trust anybody. He is shot by the mysterious Winter Soldier (Sebastian Stan). Steve takes after the assassin but he escapes and Nick dies in hospital after giving and manages to make it to Steve’s apartment.

Alexander Pierce (Robert Redford), a senior SHIELD official, wants to clear Nick’s name when his involvement in the hijacking of a SHIELD vessel becomes known. He speaks to Steve, who declines to share what Fury told him seconds before his assassination. Pierce brands Steve a fugitive and Steve is attacked in an elevator by SHIELD officials. He escapes, and goes to retrieve the retrieve the memory stick with the data on where he left it in the hospital vending machine. Natasha, who took the data from where Steve put it, shows up and says she will help him find out who is infiltrating SHIELD and help clear Nick’s name.

Will the two be able to restore Nick Fury’s name? Who is the Winter Soldier? Will the helicarriers be aired despite the warning Fury issued before his death?

I loved this movie! It was so well done. I really thought it was much better than Captain America: The First Avenger. It seemed that the producers took their time and actual care to get the movie properly done this time around.

The Winter Soldier was action packed and fast paced, and never felt too long. The fight scenes were incredible.

Personally, Steve Rogers/CA is the best of all the super heroes. Iron Man is extremely arrogant, Thor has too much pride, and the Hulk really has an anger issue, but Steve Rogers is genuinely a brave, honest man that exists way beyond his expected life span because of those things.

Nick Fury is awesome. He is always on top of things and somehow knows what is happening everywhere. He is ruthless but everything he does is for the sake of the safety of humanity.

Robert Redford was excellent as Alexander Pierce. He seems so sincere you never see his corruption underneath until it is too late.

No aliens were involved. I enjoyed it because it shows that there are corrupt and evil people in the world, and that they must be fought too.
Although Natasha Romanoff is much more likeable in this movie, I will put it out there that I simply dislike Scarlett Johansson. I haven’t found her a fantastic actress and she seems to be in roles where she is a pain in my ass. However, her more humane version of Natasha (awesome name, have to say) was more likeable than any other movie I’ve seen her in.

The Winter Soldier itself was totally badass and an excellent villain. Sebastian Stan was excellent – can this guy be cast in more movies now? He was completely respectable as Bucky, and it is heart breaking to see how it damages Steve to see his friend in such a position.

The characters developed as the movie progressed. Especially Steve Rogers, who seems to be moving on in life and making friends, and Natasha Romanoff, who starts showing that she is a human being that wants to be accepted by the people she works with and someone who takes the integrity of the people she works with seriously. I enjoyed Anthony Mackie as Sam Wilson, Steve’s war veteran side kick. He seemed to be able to immediately distinguish who is right and wrong and who to help.

Really worth the watch!