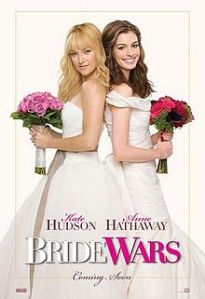 I have watched this movie so many times – in cinema, on TV, with mom (it is mom-friendly) and now on the DVD my sister brought for herself (first paycheck and stuff). It is one of those movies that aren’t really impressive, but you don’t mind watching it. It is light, though there is some forced comedy in it.

From a very young age, Emma Allen (Anne Hathway) and Liv Lerner (Kate Hudson) dreamt that one day they would both get married at the Plaza in June. When they both get engaged at the same time, they are both ecstatic, especially when they both get (different) dates at the Plaza, in June. Then a horrific thing happens: They are booked on the same date by accident. They both agree to put everything on hold until they have sorted it out, but their friendship is already showing strain.

The two are now estranged and doing anything to sabotage each other’s weddings. Liv changes the spray tan on Emma’s tanning process, and Emma comes out looking like Snooki’s competitive sister. She retaliates by turning Emma’s hair dye to blue, and sending Liv, a recovered fat-girl, chocolates, which makes her gain weight.

Meanwhile, Emma and Fletcher are beginning to fight increasingly before their wedding. He is angry at her that she has changed so much, and she in turn gets angry at him for not supporting or understanding her. Liv’s brother, Nate (Bryan Greenberg) is obviously in love with Emma, but realizes that he missed his chance.

On the day of the weddings, both girls attempt to make a truce, but when Liv tells her assistant Kevin (Michael Arden) to change back the CD she put in Emma’s chapel to the original wedding slideshow, he doesn’t, thinking that he is doing her a favor. When the CD of Emma’s drunken parties at her spring-break shows, she runs to Liv’s wedding and tackles her. They fight and make peace, but Emma and Fletcher breaks up before they can get married.

At the end of the wedding, Emma and Liv meet up after Emma’s honeymoon to Liv’s brother Nate, and they both reveal they are pregnant, and that their children are due on the same date.

The movie isn’t the best. I have always thought that Kate Hudson is a terrible actress – name one movie where she deserved praise? Anne Hathaway brings her much needed acting skills to the set, but even with her there, the movie has too little substance. It highlights how ugly and shallow girls can be, and sadly, that they turn on each other in a heartbeat. The moment Nate enters the picture you know what will happen to Fletcher and Emma. The comedy is extreme and forced most of the times.

Overall, not the best of films.

PS: And it really shows that boys should stay out of girl-fights 🙂