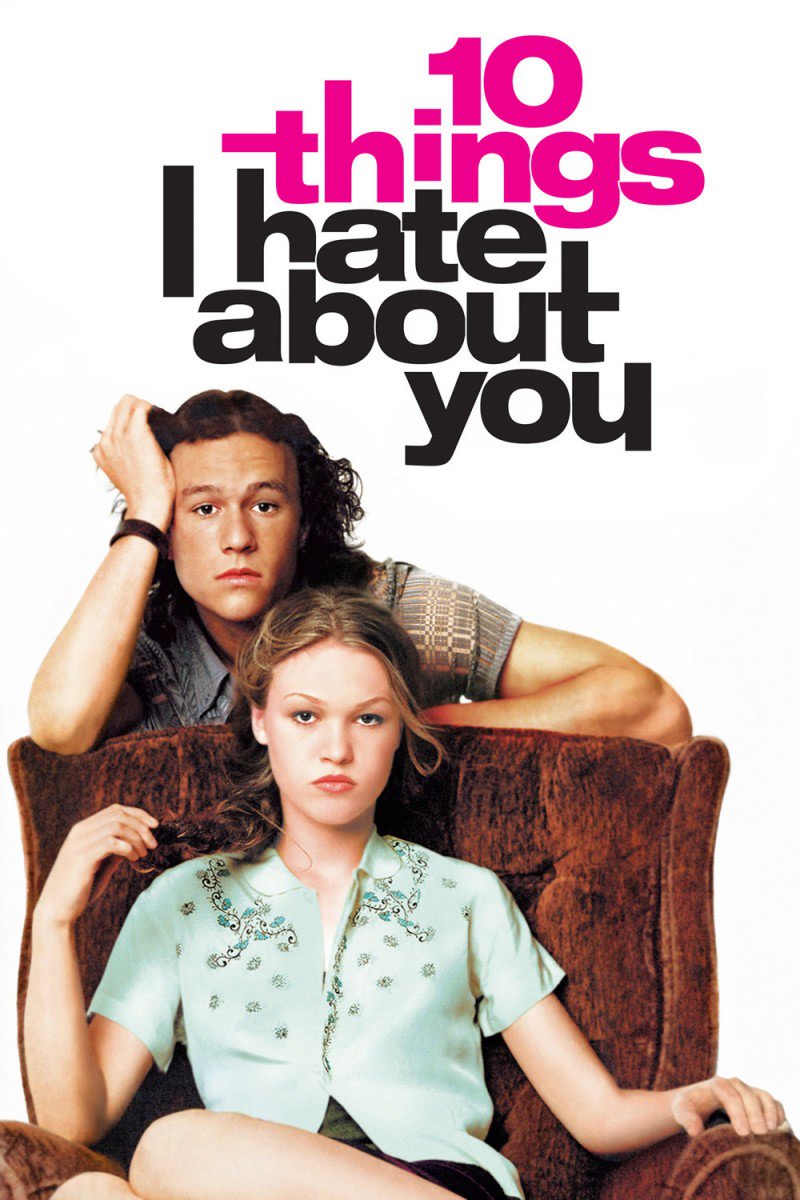 Plot: Adapted from William Shakespeare’s play “The Taming of the Shrew,” 10 Things I Hate About You starts off with Cameron, new student at Padua High, sitting in the office of the quirky guidance counselor Ms. Perky. He is then shown around the school by Michael, who will become his best friend. During his tour is when Cameron first sees Bianca Stratford, a beautiful sophomore with one problem: she isn’t allowed to date. And neither is her “shrew” sister, Katarina, a senior who loves indie rock and feminist prose and hates conformity. But Kat and Bianca’s father alters his house rule: now, Bianca can date… as long as Kat has a date, too. Now, in order for Cameron to date Bianca, he has to find someone to date Kat. So Michael helps him enlist the help of pretty-boy/jerk/model Joey Donner, tricking him into thinking that *he* will get to take Bianca out if he pays someone to take out Kat. His choice: Patrick Verona, a bad-boy with a mysterious reputation–some say he ate a live duck once, others that he lit a state trooper on fire, and even more claim that he had a brief porn career. Will Patrick win Kat’s heart? Will Cameron win Bianca’s? Or will everything hit the fan…?

2. Julia Stiles and her attitude

3. Heath Ledger and his smile

7. And this scene – this is every single dad

10. And last but not least, let’s not forget the teachers in this film

I am crazy about this film. It isfeel good, it is hilarious, it is a typical teen film. I think I could watch it once a week for the rest of my life and be totally okay with it. It is everything the 90’s rocked at, and just the typical and perfect high school film in my mind. It always hurts just a little bit to see Heath Ledger so young, alive and beautiful. He was such a charming and talented man and his death to this day remains one that consistently hurts significantly. He has such good chemistry with Julia Stiles, who does the defiant and sulky teenager on point. Bianca Stratford and JGL are so sweet together. Joey Donner? I’m not sure WHO would find him attractive, ick. Though the character was hilarious and the perfect villain for this film, you have to marvel at teenage hormones because that is the only explanation I could have for anyone finding him attractive. Mr. Stratford is probably all of parents – determined to keep his teenage daughters unpregnated and he’s not afraid to use his experience as a gynecologist as a tool. This staple chick flick is just that – a staple. I think a lot of men probably love this too, because it isn’t soppy or stupid and has some pretty damn hilarious moments in. Comment below and tell me your thoughts on this!